In a laboratory dish, researchers shut down extra chromosome that causes Down syndrome 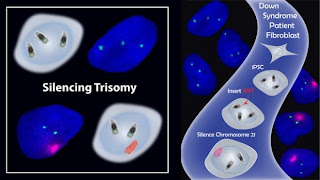 by Carolyn Y. Johnson from The Boston Globe:
Researchers at the University of Massachusetts Medical School have shown that it is possible to do what had once seemed unthinkable—shut down the extra chromosome that causes the developmental problems and intellectual disabilities in people with Down syndrome.


The surprising result—so far accomplished only with human cells grown in laboratory dishes—is the fruit of a daring, out-of-the-box approach by a scientist whose work has been shaped by her early experience counseling families of children with disabilities.
“It really is revolutionary, in terms of causing us all to rethink the one impossible thought—can you make, functionally, that extra chromosome disappear,” said Dr. Brian Skotko, co-director of the Down Syndrome Program at Massachusetts General Hospital, who was not involved in the new study. “I don’t think any of us thought it was possible or even within the current realm of scientific dreaming that we might one day be able to do it.”
The discovery, published Wednesday in the journal
Nature, highlights a broad shift in how scientists, doctors, and families view Down syndrome. In the decades since the chromosome abnormality was identified in 1959, there had been little serious talk about trying to treat its complex underlying biological cause. But research and advocacy are beginning to change the discussion: At Mass. General, two clinical trials of drugs intended to improve the cognitive capacities of adults with Down syndrome are set to start in the next few months.

The hope is that drug therapies, even given in adulthood, could partly restore normal function in the brains of people with Down syndrome. But the condition alters brain development in the womb, so some scientists believe that to be most effective, therapies would need to be administered during pregnancy. Nobody is sure whether the UMass technique could ever be leveraged as a treatment either.
Two drugs will be tested at Mass. General, one made by the Swiss pharmaceutical company, Roche, and another by Elan Corporation in Ireland.
The idea of treating the core problems of Down syndrome and not just the medical problems that accompany it, appeals to families, even though such drugs would be unable to reverse all the developmental problems.
Louise Borke of North Andover said participating in trials of therapies is something she would seriously consider for her 24-year-old son, Louis Sciuto. He has two jobs and lives independently, and he rides his bike to her house to play basketball in the driveway, but like any parent she would love to give him every opportunity.
“If it would just make the individual a higher-functioning person with Down syndrome, I would be surprised if there’s anyone who wouldn’t want to try it,” Borke said.
To attempt the UMass research, Jeanne Lawrence, a professor of cell and developmental biology, weaved together two unlikely threads: her interest in the biology of the sex-determining X chromosome and a passion for helping families of children with intellectual disabilities.
Lawrence began her career by earning a degree in genetic counseling in the 1970s. She did not get much clinical experience as a counselor, because when she and her husband moved to New Haven, Conn., there were not open jobs. She was offered a position in the laboratory of a human geneticist, and she quickly became fascinated by the fundamental biology of chromosomes, the structures that carry DNA in our cells.
Lawrence went on to earn a graduate degree and eventually moved to UMass, her research taking her far from her initial interest in genetic counseling. Conditions such as Down syndrome were never far from her mind; she invited a family with a child with Down syndrome to come talk to medical students about their experiences. She always remembered a summer she spent teaching adults with Down syndrome how to swim. She got especially interested in a gene called XIST that occurred on the X chromosome. The XIST gene was unusual—it did not produce a protein, but another type of genetic material called RNA. That molecule appeared to latch on to one copy of the X chromosome in women and shut it down. Women have two copies of the X chromosome, but only one is needed—men have only one X chromosome. So the body has a natural way to deactivate one, turning it off.
That planted an idea in the back of Lawrence’s mind: Would it be possible to shut down extra chromosomes that cause conditions such as Down syndrome using the same approach?
“It was just a glimmer of, ‘Huh, I wonder,’” Lawrence said in an interview. But there were huge technical questions about whether it was feasible.
As technologies evolved, she saw a possible path forward. She asked the dean of the medical school, an expert in gene therapy, whether she would be wasting her time. She had a conversation with a geneticist she used to work with, asking whether it seemed crazy to try.
Both were encouraging.
“Those parents [of children with Down Syndrome] would do anything to help those children, so I don’t think it’s crazy,” her geneticist friend said.
Supported by a type of grant from the National Institutes of Health that’s awarded to risky projects, Lawrence and two colleagues, Jun Jiang and Lisa Hall, began working on the problem.
Even for a high-risk grant, Lawrence said, “I think they thought this was at the margin of too high risk.”
The basic idea, however, is simple: they would use new genome editing techniques to insert the large XIST gene into the extra copy of the chromosome in cells from a Down syndrome patient. Then they would see whether they could trigger the gene to shut down the chromosome.
The researchers started with stem cells that had been created by reprogramming skin cells from a man with Down syndrome. They inserted the gene for XIST into one of the extra chromosome copies, and then were able to create specific types of cells and see what happened when they turned the gene on.
Tests of gene activity suggested the extra chromosome had stopped functioning. Strikingly, they saw that in brain cells with the active XIST gene, cells were able to grow more rapidly and were able to better form progenitors of other brain cells. They are continuing to test the differences between cells, and are hoping next to use the technology to shut down the extra chromosome in a mouse with a version of Down syndrome.
Prior to publication of the paper, Lawrence presented her results to a conference of researchers in Washington, D.C.
“I really believe people’s jaws dropped at that meeting,” said Dr. Diana Bianchi, executive director of the Mother Infant Research Institute at Tufts Medical Center. Bianchi said she was particularly interested in the effect shutting off the chromosome had on brain cell formation, since she is interested in developing prenatal therapies that could normalize brain development in the womb. Full story for BostonGlobe.com subscribers.
Carolyn Y. Johnson can be reached at cjohnson@globe.com. Follow her on Twitter @carolynyjohnson.

by Ian Sample from The Guardian:
Scientists have corrected the genetic fault that causes Down syndrome – albeit in isolated cells – raising the prospect of a radical therapy for the disorder.
In an elegant series of experiments, US researchers took cells from people with DS and silenced the extra chromosome that causes the condition. A treatment based on the work remains a distant hope, but scientists in the field said the feat was the first major step towards a "chromosome therapy" for Down syndrome.
"This is a real technical breakthrough. It opens up whole new avenues of research," said Elizabeth Fisher, professor of neurogenetics at UCL, who was not involved in the study. "This is really the first sniff we've had of anything to do with gene therapy for Down syndrome."
Around 750 babies are born with DS in Britain each year while globally between one in a 1000 and one in 1100 births are DS babies. Most experience learning difficulties.
Despite advances in medical care that allow most to live well into middle age, those who have the disorder are at risk of heart defects, bowel and blood disorders, and thyroid problems.
Though a full treatment is still many years off, the work will drive the search for therapies that improve common symptoms of DS, from immune and gastrointestinal problems, to childhood leukaemia and early-onset dementia.
"This will accelerate our understanding of the cellular defects in Down syndrome and whether they can be treated with certain drugs," said Jeanne Lawrence, who led the team at the University of Massachusetts.
"The long-range possibility – and it's an uncertain possibility – is a chromosome therapy for Down syndrome. But that is 10 years or more away. I don't want to get people's hopes up."
In a healthy person, almost every cell in the body carries 23 pairs of chromosomes, which hold nearly all of the genes needed for human life. But glitches in the early embryo can sometimes leave babies with too many chromosomes. Down syndrome arises when cells have an extra copy of chromosome 21.
Lawrence's team used "genome editing", a procedure that allows DNA to be cut and pasted, to drop a gene called XIST into the extra chromosome in cells taken from people with Down syndrome.
Once in place, the gene caused a buildup of a version of a molecule called RNA, which coated the extra chromosome and ultimately shut it down.
Previous studies found that the XIST gene is crucial for normal human development. Sex is determined by the combination of X and Y chromosomes a person inherits: men are XY, and women are XX. The XIST gene sits on the X chromosome, but is only active in women. When it switches on, it silences the second X chromosome.
Lawrence's work shows that the gene can shut down other chromosomes too, a finding that paves the way for treating a range of other "trisomy" disorders, such as Edward syndrome and Patau syndrome, caused by extra copies of chromosomes 18 and 13 respectively.
Writing in the journal Nature, the team describes how cells corrected for an extra chromosome 21 grew better, and developed more swiftly into early-stage brain cells. The work, the researchers write, "surmounts the major first step towards potential development of chromosome therapy".
The work is already helping scientists to tease apart how an extra chromosome 21 causes a raft of problems that strike people with Down syndrome at various ages. "By the time people with Down syndrome are in their 60s, about 60% will succumb to dementia. One question is, if we could turn off the extra chromosome in adults, would that stop or ameliorate their dementia?" said Fisher. Another approach would cut the risk of leukaemia by silencing the extra chromosome in bone marrow cells.
The US team has already begun work that aims to prevent Down syndrome in mice, by silencing the extra chromosome 21 in early-stage embryos. "That would correct the whole mouse, but it's not really practical in humans," said Lawrence.
A chromosome therapy for humans would be fraught with practical and ethical difficulties. To prevent Down syndrome, the genome editing would have to be performed on an embryo or foetus in the womb, and correct most, if not all, of the future child's cells. That is far beyond what is possible, or allowed, today.
Posted by DSD at 12:49 PM