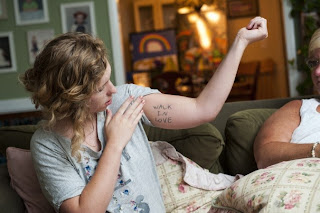 by Theresa Vargas from The Washington Post:
He was crying out for her.
“Mommy!” someone heard Ethan Saylor scream as three off-duty Frederick County deputies yanked the 26-year-old with Down syndrome from a movie theater seat and dragged him, struggling, toward the door.
Patti Saylor was already in the car on her way to the Regal Westview cinema after getting a call from her son’s 18-year-old aide, saying she was unsure what to do. They had just finished watching “Zero Dark Thirty,” and now Ethan didn’t want to go home. He had hit a Lenscrafter store’s window in protest.
Patti was maybe five minutes away when she called the aide, expecting to hear that Ethan had already calmed down, that the two were fine and eating at McDonald’s. Instead, she was told that Ethan was unconscious, not breathing and on his way to the hospital.
Only this week — after the Frederick County Sheriff’s Office released long-awaited documents detailing its investigation into Robert Ethan Saylor’s death Jan. 12 at the hands of its deputies — would his mother read the witness statements describing how her son had called out for her in his last moments.
“I have to stop myself and think he’s not experiencing that fear at this moment,” Patti said, crying in her New Market living room, where the Saylor family had gathered for their first sit-down interview since Ethan’s death. “That’s over. That’s done. He’s not feeling that now.”
For six months, the Saylor family has remained quiet, patiently waiting to learn how a young man fascinated with law enforcement died with handcuff marks on his wrists.
The most comprehensive picture yet came Monday when the sheriff’s office released a 98-page incident report and handwritten statements from 22 witnesses, including Saylor’s aide, the theater employee who called security that night, and moviegoers who suddenly found themselves watching an unexpected drama unfold off-screen.
The witnesses, whose names have all been redacted, give varying accounts of what happened. But taken together, their statements show that the exchange between Saylor and the officers went from verbal to physical quickly and, in the minutes it would have taken his mother to get to him, spiraled toward a devastating end.

‘I’m not leaving’
Sgt. Rich Rochford, 41, was the first deputy to approach Ethan that night .
He wasn’t in uniform; instead, he was moonlighting as a security guard. He was summoned to the theater by an associate manager who had noticed Ethan slip into Theater 9 and try to watch “Zero Dark Thirty” for a second time that evening.
“I said if you want to watch the movie again, you will have to purchase another ticket,” the theater employee wrote in his statement. He added that Ethan told him he didn’t have any money and walked out but then returned.
Ethan’s aide tried to defuse the situation.
“Yes, we are having a little issue, I’ll handle it,” she told the manager, according to her written statement. “We just have to be patient.”
When Rochford arrived, the aide warned him, too. She told him they should “wait it out” and that Ethan might curse at him and “freak out” if he was touched, she wrote.
By this point, moviegoers had already begun shuffling into their seats. Among them were a father and son sitting in the same row as Ethan, two male friends sitting about five rows behind him and a couple who had taken the aisle seats in front of Ethan because the woman had broken her ankle. All of them in their statements reported that Rochford calmly asked Ethan several times to leave. They also said that, in response, Ethan cursed and insisted, “I’m not leaving.”
A few minutes passed before Rochford was joined by Lt. Scott Jewell, 52, and Deputy 1st Class James Harris, 46, who were also working security jobs at the Westview Promenade shopping center. Together, the men pulled Ethan, who weighed 294 pounds, from his seat as he wailed and resisted.
He was “squalling like a child,” one witness said, “squalling, ‘No, no, no.’”
Several said they heard Ethan being told that he was going to jail. One heard him being read his Miranda rights.
The theater manager told authorities that he saw the deputies try to pin him to a wall so they could handcuff him. When he resisted, they moved him toward an inclined area that exits the theater, the manager wrote. That’s when they fell in a heap, with Ethan on the bottom.
Witnesses reported not being able to see Ethan but hearing the click of the handcuffs and Ethan “whine and cry” and say, “It hurt, call my mom.”
Then, nothing. Silence.