Children's Book Focuses on Down Syndrome 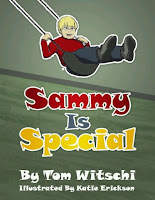 by Lauren Estes from The Cullman Times:

Most children’s books are centered around characters overcoming obstacles, maybe a lost puppy finding its way home, or a brother and sister learning to share toys.

“Sammy is Special,” a children’s book written by Tom Witschi, teaches a different lesson to its readers. The book’s focus is on a child, Sammy, with Down syndrome, who moves into a new neighborhood and impacts everyone he meets. Witschi  grew up with an older brother who had special needs and said he was the inspiration behind the story.

“Sammy’s character is loosely based on my brother, Patrick, but I didn’t want the character to be specifically based on one person,” Witschi said. “For kids and even adults, it can be hard to understand why someone is born different, but God has his hand in that. When you can learn to look past someone’s disability, it can impact your life.”

The story is centered around one of the other main characters, Sonja, who is Sammy’s age and struggled with understanding why Sammy was different from other kids.  After talking with her mother, she was encouraged to befriend Sammy.

Sonja began playing with Sammy on the playground and after a period of time, Sammy invites Sonja and her mother to his church where Sonja’s mother eventually accepts Jesus into her heart. Sonja and Sammy stay friends over the years, talking on the phone every Sunday. Eventually, Sonja becomes a lawyer and the book says she “wins important cases that help people.”

The story goes on to tell the impact Sammy had on so many lives, including Sonja’s. As she said, “Sammy was the example of how to be like Jesus, and he showed me Jesus.”

Witschi finishes his book with Bible verses, relaying encouragement to his readers. From Proverbs 17:27, “A man of knowledge used words with restraint and a man of understanding is even-tempered.” He also referred to Psalm 139:14, “I praise you because I am fearfully and wonderfully made, your works are wonderful.” He finished the book with, “God loves you and you are special.”

Witschi said this book is meant to open doors for families to connect with their children and gain a better understanding of special needs.

“A book like this can help children to better grasp what special needs is and also allows parents to relay the information to their children easier about special needs,” Witshchi said.