Boy with Down syndrome, 6, left to die because of tired doctor's mix-up 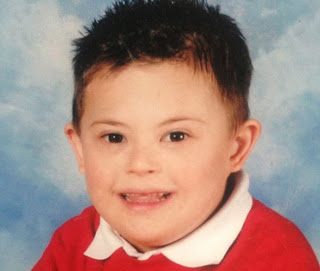 by Keith Kendrick from Parentdish:
A six-year-old boy with Down syndrome died after a hospital doctor mixed him up with another child who had a 'do not resuscitate' order.

Jack Adcock was admitted to the Leicester Royal Infirmary with breathing difficulties, a raised temperature and high heart rate.

His condition deteriorated and he suffered a cardiac arrest. But the inquest into his death heard how a paediatric registrar stopped staff who were trying to save the little boy – and said she didn't check his identity because she was too tired after a long shift.

Dr Hadiza Bawa-Garba said: "I should have checked the face before stopping. But I had been working for 12 hours with no break."
The 36-year-old doctor admitted she was 'not on top of things' having recently returned from 13 months of maternity leave.

A 'do not resuscitate' order on a patient's file means that a doctor is not required to revive a patient if their heart stops.

They are issued after discussions with parents or their family and are designed to prevent unnecessary suffering, for example if a patient's condition is such that resuscitation is unlikely to succeed or if successful resuscitation would lead to a poor quality of life.

But Jack's mother Nicola Adcock, 39, described him as a 'tough little cookie' and confirmed a 'do not resuscitate' order had never been placed on him.

Jack died of pneumonia in the hospital on February 18, 2011, the same day he was admitted, after Dr Bawa-Garba interrupted attempts to resuscitate him.

Asked by Leicester Coroner Catherine Mason whether she actually saw Jack's face before telling staff to stop, Dr Bawa-Garba said: "There were a lot of people in the room and I can't remember if I saw a face or not.

She realised her mistake only when another doctor asked her: "Why is Jack not for resuscitation?"

Dr Bawa-Garba then shouted: "He is for resus – it's the wrong patient," the inquest heard. As soon as she realised her mistake, she returned to Jack and tried to treat him as part of a team of medics who battled for nearly an hour to resuscitate him, but were unsuccessful.

Mrs Adcock and her husband Victor Adcock, 47, who also have a younger daughter, listened as the inquest was told how the 'crash team' was called when Jack went into cardiac arrest at about 7.45pm.

His mother had been at his bedside and it was she who first asked for help. The inquest, expected to last another four days, continues.
Posted by DSD at 9:45 AM

Email ThisBlogThis!Share to TwitterShare to FacebookShare to Pinterest
Labels: court case, do not resuscitate, Down syndrome, hospital, UK