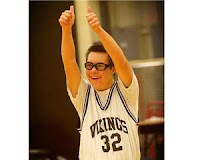 from ESPN:
Middle schooler with Down Syndrome, Owen Groesser, makes SportsCenter's Top Plays after draining two 3-pointers.
Owen Groesser enjoyed a night to remember, and took Twitter by storm in the process.
Groesser, a junior high student with Down syndrome, made a pair of 3-pointers in his school's basketball game Wednesday, prompting a Twitter campaign that resulted in a highlight on "SportsCenter."
According to ABC affiliate WXYZ in Detroit, Groesser had not played this season for Van Hoosen Junior High School, which was playing its season finale Wednesday.
But after entering late in the game, Groesser received a pass beyond the arc and sank a 3-pointer, sparking a wild celebration in the stands. Groesser also made another 3-pointer, finishing with six points in approximately two minutes of playing time.
After the game, Groesser's friends and teammates launched a Twitter campaign called #GetOwenOnSportsCenter, which trended as highlights of the game spread on the Internet.
The campaign was a success, as Groesser's exploits were featured on "SportsCenter's" Top-10 highlights Wednesday night.

Robert Griffin III Helped An 8th Grader With Down Syndrome Get On SportsCenter
by Cork Gaines from the Business Insider:
Owen Groesser is an eighth grade basketball player with Down Syndrome from Rochester Hills, Michigan. He had not played all season until his coach had him play the final two minutes of the team's final game. Owen made the most of his two minutes sinking two three pointers.
Friends and family then started a movement on Twitter to try and get Owen on SportsCenter.
One person reached out to Robert Griffin III through Twitter and RG3 forwarded (retweeted) the message to his 780,000 followers. And sure enough, Owen came in at #10 on SportsCenter's "Top 10" and later he and his father were interviewed.
There are a lot of bad things on Twitter. But there are also a lot of great things. Here's the "Top 10" clip as well as a shot of Owen and his dad being interviewed...
Posted by DSD at 10:25 AM