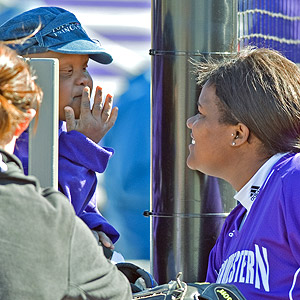 "Michala is my biggest fan, my biggest critic, my best friend -- my worst enemy sometimes," Michelle said, punctuating the last category with a shake of her head and a laugh. "She's the kind of person I strive to be like. She's the definition of bold. She's bold, she's inspired, she's smart, she's funny, she can hold a conversation. She can get a group to come together around her. She's what I want to be."

Michala also has Down syndrome, a chromosomal condition affecting hundreds of thousands of children marked by an array of distinctive physical traits and varying degrees of cognitive impairment. But even as that reality undeniably shapes her world in countless ways, it does not limit the effect she has on others as she travels through it.

"When I think about, 'I don't want to do that paper,' I think about [that] my sister can't do that paper," Michelle said. "So you know what, let me go ahead and knock this out. Let me go ahead and knock this out because there are people who are in my life who don't have the opportunity I have. She's just so great. If you're feeling down, she's just the person who is like, 'What's going on?' And as annoying as it might seem at that time, she just brings light to your bad situation."

There was little good about the situation when Michala was born two months premature. Just 10 years old at the time, Michelle recalls her older brother Michael telling her they had to be extra nice to their mom -- a universal sign of concession among any siblings that something serious is afoot -- when she came home from the hospital. Michelle wasn't entirely sure at that time how big newborn babies were supposed to be, but she was pretty sure there was something extraordinary about her new sister fitting in just one of her 10-year-old hands. The fight didn't get easier for Michala, who needed heart surgery when she was 2 years old.

Yet if all those challenges and others posed by Down syndrome made it clear that Michala's experience was unlike those of her older siblings, and most other children, her family tried from the outset to treat her just like any other child. There wasn't any crash course in the specifics of Down syndrome for Michelle and Michael. Instead, they pushed Michala to keep up like any younger sibling, mindful only that things might take her a little longer. These days, she goes to school and does her homework at the kitchen table like any other kid her age. She's a constant in the bleachers (and the concession stand, the concourses or anywhere else she wants to venture) at Michelle's games, both in Evanston and at the tournaments in Arizona and California the Wildcats frequent during the season's opening months.

And, of course, she is enough a part of Michelle's teams to call the occasional meeting. "I'm so happy that we let her experience all these things that a lot of kids don't experience who don't have disabilities," Michelle said. "She just has grown so much, I think, from being around teams and being around people I have played with and seeing all these things and picking up things."

That list of things includes one of the gadgets increasingly ubiquitous in the preteen set -- a cellphone. And with a list of many of Michelle's current and former teammates programmed in it, Michala is in constant communication.

"She's a tough, tough girl," said senior Jordan Wheeler, a frequent recipient of the calls and texts and one of Michala's longest-standing confidants on the team. "She's a tough judge. She's the one who is going to tell you when your hair looks a mess or your jersey is untucked. She just doesn't hold back, but that's one of the best things about her. That's one of the best things you would ask for from your closest friend is to be brutally honest. And she's just so lively and vivacious. She just has that spirit about her that she's going to be as blunt as she wants to be."

She's seen her little sister grow over the past four years, how her speech has improved to the point that she's universally understood and how she's able to gauge what's funny and how to make people laugh. She says she's not worried about her sister's future, that she believes Michala can find work and be self-sufficient in the future, especially with such strong family support behind her. Her only concern, she notes with a certain sisterly dryness, is that Michala may throw too many parties as she gets older.

In her pride is the other half of the story. Michelle's softball exploits gave Michala a setting in which she could find her voice, but that might have been a two-way street.

"That's one of the things that stands out to me the most about Michelle, is that she will give you the clothes off her back, she will give you all the time she has in the day just because she knows that you need her."

Perhaps she is that way because of how much her sister needed her. Perhaps Michala is the effervescent, charming girl that she is because Michelle was that way all along. Perhaps, as is so often the case, it's a little of both. And as much as they mean to each other, as one of the most productive on-field careers in Northwestern history winds to a close, it's clear that home runs are the least that Batts -- both Batts -- have to offer to an entire program.


"I think Michala is a tremendous inspiration to Michelle," Northwestern coach Kate Drohan said. "To have Michala around the team is a real gift. From the beginning of our recruiting process, when we first sat down with [parents] Maggie and Michael and Michala, it was obvious to our staff really how important Michala is to Michelle's experience. Just the love and caring Michelle shows for Michala is inspiring in itself. …
"How our team celebrates Michala is a big part of who we are."
Posted by Rick at 3:53 PM