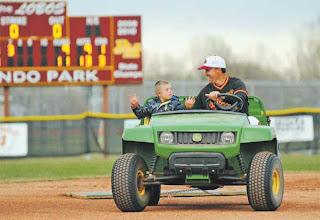 Rocky Mountain High School baseball coach Scott Bullock never has had to search for his team's character. It was there when the Lobos won the past four big-school titles with skill, class and academic acclaim. They're in the mix for a fifth this spring.

Perhaps that's because Bullock, from age 6, learned to grow up fast. It was then his older brother, Dean, had a diving accident that led to his becoming a quadriplegic. Six months after his brother's accident, his mother died. His brother passed away in January at age 48.

As for his identity, the person Bullock ultimately became as an adult has also been greatly shaped by his son, Tagg, who will celebrate his seventh birthday next month. A short, stocky bundle of energy bound for first grade next year, Tagg was born with Down syndrome, a condition caused by the presence of an extra copy of the 21st chromosome. He has impairment of cognitive ability and physical growth as well as the distinctive facial features associated with Down syndrome, but Tagg's ever-busy, well-rounded father couldn't be prouder.

"We didn't know about it until he was born. We were thrilled to have a child," Bullock said of himself and his wife, Michelle. "Not knowing a lot about Down, not knowing enough that he had special needs, was extremely painful. Our emotions were mixed."

Bullock, 40, had been shocked and shaken before by unexpected news, so why should greeting his unexpected special guy have been any different?

"It was tough," he said. "The toughest thing for me was that he wasn't the kid you were expecting. That was hard. But not for one second did we ever lack the love that we feel for this child."

Bullock, a native of Torrington, Wyo., who teaches health and physical education at Rocky Mountain, had encountered Lobos students with Down syndrome and calls them "great kids."

Tagg's presence seems to bring out the best in others, creating a balance of caring and feeling fortunate for themselves.


He is a regular visitor to Lobos' games and practices, where he has free rein to go through virtually every players' bat bag. Throwing the ball or hitting? Forget it. All he wants is a ride when the cart is used to drag the infield and the chance to roam from player to player.

"The guys are very patient with him," Bullock said.

Said Rocky Mountain senior pitcher-outfielder Eric Ferguson: "It makes us realize that everything you've got is important, and we're lucky."

Rocky Mountain athletic director Wayne Moddelmog sees the gift Tagg provides the school.
"That whole relationship that Scott has with Tagg and Tagg has with our baseball community and our Rocky Mountain High community has really been a neat thing," he said. "I think it really puts life into perspective."
Said Lobos pitching coach Glen Schwab: "(Tagg) and Coach have such a love affair."

Don't underestimate Tagg. He's strong, Bullock said. Likes to go back and forth in the swing in the family backyard. And keep him away from the pizza, ice cream and hot dogs.


"Scott teaches the kids more than just baseball," Moddelmog said.
The team is always looking for ways to give back throughout the Fort Collins community. After last week's victory over Chaparral, Bullock and his father presented a $5,000 check to Craig Rehabilitation Center, which gave his brother so much over 34 years. The money came from his brother's foundation.
Schwab got misty-eyed when recalling it while watching Bullock parade Tagg through the infield after a game Tuesday.

"And that's why that guy right there is the best at what he does," he said, pointing at Bullock.
Bullock will settle for second, but only if it involves standing right behind his son.

"Tagg has such a tremendous outlook on life," Bullock said. "We can all learn something from him."