Target & Nordstrom recognized for including a model with Down syndrome 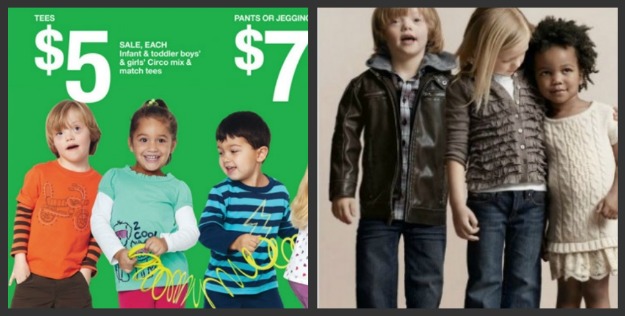 There is tremedous reaction to the subtle choice of model selection in 2 recent Target and Nordstrom ads. This is a compilation of reports including the original post that started the viral surge of support for inclusion for people with disabilities.


the post that started it all: Noah's Dad
Check out this great post from Noah's Dad regarding a picture from Target's latest ad.
"If you were browsing through this week’s Target ad you may have passed right over the adorable little boy in the bright orange shirt smiling at you on page 9!  And if so, I’m glad!"
Read the whole post here.
from the The Orange County Register by Jo Ashline:
At $5, the long-sleeve orange t-shirt with a motorcycle emblazoned on the front is a steal.
The photo of the precious little boy modeling the adorable outfit? Priceless.
No, it's not my son adorning the colorful ad. Which is why it's such a big deal to families like mine to see a model with special needs depicted in a nationwide ad. It's rare and unusual. When a large corporation like Target makes it a point to represent our special needs demographic, parents like me sit up and take notice.
from The Hollywood Reporter by Elizabeth Snead:
Ryan’s proud mom also commented on the blog: " We are very pleased that Nordstrom placed Ryan in their catalog. The whole process of modeling is an extreme confidence booster for him. He received so much warmth and caring from the Nordstrom crew that he thought they were there just for him! We are honored that Ryan is making the Down Syndrome community proud. He is a beautiful boy inside and out. He makes us better parents, and a better family."
from the San Francisco Chronicle by Amy Graff:
The blogosphere is praising Target for placing Ryan in the ad and not making a big deal out of it. The company didn’t send out press releases or reach out to media. Ryan’s just another one of the kids and being treated as an equal. People are saying this is a great example of inclusion—as Down syndrome children are so often excluded.
from The Week:
This is "a turning point in commercial fashion," says Emma Jones at Lime Life. Given how harsh and "fickle" the modeling industry can be, Target and Nordstrom deserve praise for being so inclusive. Ryan's smiling face is a welcome sight, says Dodai Stewart at Jezebel, but Target wasn't exactly taking risks. High-end brands such as Calvin Klein or Chanel will always "aim for exclusivity" with ads featuring "impossibly pretty people in multi-million-dollar homes and jets." But mass-market companies "thrive on a democratic, 'something for everyone!' vibe." Target and Nordstrom could bet going in that the middle-class parents they're targeting would "take note, and applaud." Maybe, but it's nice that Ryan is "not singled out," says Julia Rubin at The Frisky. The ads don't struggle to prove a point. They just treat Ryan like "just another super cute kid smiling for the camera."
from Daily Mail by Tamara Abraham:
'We are honored that Ryan is making the Down syndrome community proud. He is a beautiful boy inside and out. He makes us better parents, and a better family.'
Earlier this year, another child with Down's Syndrome made an impact on the modelling world.
16-month-old Taya Kennedy was signed to an agency in the UK, and her lively personality already has major firms lining up to cast her.
from Styleite by Julia Rubin:
The best thing about Target and Nordstrom’s casting of Ryan is that he’s not singled out in any way — he’s just another super cute kid smiling for the camera. The ads are inclusive, yet they aren’t trying to prove a point. They come across as completely ordinary, which in this case is a really wonderful thing.
from Babble by Joslyn Gray:
Television show Glee may be one reason that people with Down Syndrome are becoming more visible to the public eye. Actress Lauren Potter has a recurring role on the show as Becky Jackson, a member of the McKinley High cheer squad.  Lauren and her character both have Down Syndrome.  The show The Secret Life of an American Teenager also features actor Luke Zimmerman, who also has Down Syndrome, in the role of Tom Bowman.
from the Gloss by Jamie Peck:
Of all the groups of people ignored by the people who make clothing advertisements, the disabled might be most underrepresented; it’s sadly rare to even hear them get mentioned in conversations around this issue. That might be starting to change, though, at least in the world of children’s fashion, as a little boy with Down Syndrome has been showing off his cuteness in ads for major outlets
from Jezebel:
Ryan has what some folks call an "all-American" look: Blond hair, blue eyes, creamy skin. He also has Down Syndrome. And he's in a Target ad this week — after appearing in a Nordstrom catalog last year. AdWeek directs our attention to a blog called Noah's Dad, written by the father of a boy with Down syndrome, who is excited about the Target ad, noting that the retailer has made a some big statements by casting Ryan in the circular.
from Ad Week by Tim Nudd:
One young man is making great strides in the modeling world despite what many might see as a significant impediment—he has Down syndrome. His name is Ryan, and he appears on page 9 of the new Target circular, just a few months after making an appearance in the Nordstrom catalog. A blog called Noah's Dad, written by the father of a different boy with Down syndrome, posted the Target ad this week and lauded the retailer for being seamlessly inclusive without drawing attention to itself.


from CNN by Craig Johnson:
Another blog, Carried With Children, identified at least three times that Target has used a child with Down Syndrome in its advertisements. "By doing this, they are helping break stereotypes and most importantly, it allows children with special needs to see that they can succeed and they are not alone in this world. I hope this is the beginning of a really great trend in advertising," the site's owner, Carrie, wrote in a post last year.
Posted by Rick at 12:53 AM