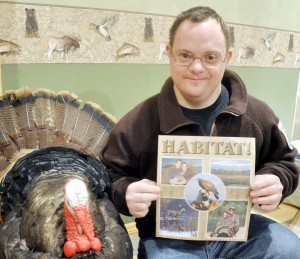 from Freemont Tribune by Tammy Real-McKeighan:

Matthew Roberts is a cover guy.

The 30-year-old Fremont man is featured on the cover of the newest edition of Habitat! magazine set to come out in January 2012. He's also made an appearance in a Kiwanis newsletter and looks forward to seeing his photograph in the Tribune.

Roberts was photographed for the magazine while taking part in a duck banding endeavor last January at the Bosque del Apache National Wildlife Refuge in San Antonio, N.M. There, wildlife biologists and 25 volunteers worked to put bands on more than 180 ducks and to check 60 previously banded fowl.

Biologists also swabbed the throats of ducks to check for aviary flu or any illnesses in the duck groupings. The ducks included pintails, wood ducks and mallards.

Roberts went to the refuge with his parents, Kevin and Joyce, while visiting his aunt, Joanie McMains. Joyce's sister volunteers at the refuge.

To catch the ducks, biologists put bait on a marsh at the refuge and then wait. When the ducks come, they propel a net over the ducks. The biologists and volunteers then have only a short time to get the ducks out from under the net, which holds them down, so that the fowl don't drown, Joyce Roberts said.

Just nine of the hundreds of ducks didn't survive. Those ducks then are used as specimens for biology and zoology classes and for displays in science units, she said.

Once caught, the ducks are divided by gender and placed in coops.

Matt Roberts got to help put the ducks into cages, then take them out and help hold them so biologists and students could measure them and determine their age. He learned to tuck the ducks' heads under their wings, which is less stressful for the bird.

Joyce took notes for two biologists from the fish and game department who were taking the swab samples. Kevin also helped hold ducks while they were being measured.

If a bird wasn't banded, a biologist would put a numbered band on its leg. For ducks with bands, the biologists measured the bird and put findings in a computer. Doing so helps scientists tell where the birds have been and how much they've grown.

Enough ducks had gathered by 10 a.m. for the net to be propelled over the area. Biologists and volunteers worked until 6 p.m.

Matt said he didn't get tired, however.

During the duck banding process, photographer Joe Zinn shot photos of Matt Roberts working with Ashley Inslee, refuge biologist. Their photograph, along with others, is featured on the "Habitat!" cover.

Matt, who has Down Syndrome, is the first person with developmental disabilities to help with the duck banding process, Joyce said.

Back in Fremont, Matt stays busy at the ITC workshop at ENCOR in Fremont. He is also involved in the Aktion Club, supported through the Kiwanis organization.

Matt was wearing his Aktion Club shirt while at the Albuquerque airport with his parents. A Kiwanis Club member from Minnesota, who was there, asked the Roberts if Matt liked that club.

The Roberts told Jim Holtam, who help organize the local Aktion Club chapter, about their airport encounter. Matt - decked out in his Aktion sweatshirt - then had his photo taken with Holtam for the Kiwanis newsletter with information about Matt's club promotion at the airport. That newsletter came out last spring.

Joyce Roberts said Sandhill cranes that go through Nebraska winter at the Bosque del Apache refuge.
"They had over 15,000 when we were there," she said.

Data from the refuge website states that tens of thousands of birds, including the cranes, Arctic geese and many types of ducks gather here each autumn and stay through the winter. Managed by the U.S. Fish and Wildlife Service, the refuge consists of more than 57,000 acres situated along the Rio Grande River near Socorro, N.M. Bosque del Apache is Spanish for "woods of the Apache."

"Habitat!" magazine is published by The Friends of the Bosque del Apache NWR Inc.

So what does Matt want to do now that he's made the magazine's cover?