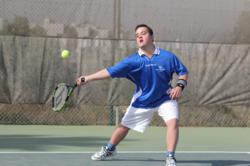 from PRWeb:
Elad Gevandschnaider, 23 years old, was born with Down syndrome. Because of his disability Elad, is not required to serve in the Israeli Army, still, he decided to volunteer. It started with two years of national service in a primary school in the southern part of Israel, Beer Sheva, and now Elad has just learned he has been accepted to serve two more years at an Israeli army equipment base. As a volunteer soldier, Elad has dreamed of the day when he would be able to wear a real soldier’s uniform and serve his country. Talk to Elad and he will tell you that the primary reason he has been able to do something that no other special needs person has done in the history of Israel, and he will tell you the story of his love for tennis and how the Israel Tennis Centers have been the focal point of his life for many years.
Elad has been playing tennis for six years. He is the son of immigrants who arrived in Israel in the 1960's: his father is Polish and his mother hails from Morocco. The family lives in Beer Sheva and Elad trains three times a week at the Israel Tennis Center near his home: twice in the Special Tennis Program and once on the Achievement Program where he competes with all the other children. At the end of February, Elad will travel to Florida for three weeks to participate in exhibition matches in order to raise funds for the Israel Tennis Centers ("ITC") and the special needs children programs – marking the first time that a player with special needs will travel to the United States and represent the Tennis Center Foundation in such an event.
In the past year and a half, Elad has made great progress with his tennis. It started at the National Special Olympics tournament which was followed by the European Championships held in Warsaw, Poland in February 2010. Elad, during his first tournament abroad, won the silver medal; it was very emotional for his Polish father, who accompanied him to the tournament. Elad’s father Yossi Gevandschnaider noted that, “When Elad was 17 his physical education teacher suggested he try to play tennis. I didn't even realize that he was talented or that he had any potential for success. His coaches proposed that he start competing in tournaments organized by the Special Olympics organization which works with the ITC. We started traveling to tournaments throughout Israel where Elad achieved some great results."
In June 2011, Elad continued with his international success – this time at the World Games for Special Olympics in Athens, Greece. Four players went out to represent Israel: Elad, Tamir Segal (ITC – Kiryat Shmona) and two Arab children who train at the Tennis Centers in Jerusalem, Muhammad Kunbar and Jafar Tawil. It was the first time that Arab sportsmen represented Israel at an international Special Olympics event and both came from the tennis programs of the Israel Tennis Centers. Elad won the silver medal in singles and in the true spirit of Co-Existence, he won the bronze doubles medal with Muhammad Kunbar.
When they returned to Israel, the athletes attended receptions hosted by the Prime Minister, Benjamin Netanyahu and the President, Shimon Peres. The most emotional moment of the reception with the President came when Elad, who even before the Games in Greece was filmed for a television commercial singing the "Hatikva", was asked by Peres himself to stand and sing it again. Elad stood up and sang the Israeli Anthem in its entirety in front of the whole crowd.
The Israel Tennis Centers Foundation (ITC) (http://www.israeltenniscenters.org/) is a 501 (c) 3 non profit organization that has worked for over 35 years to enhance the social, psychological, and physical development of Israeli youth through the medium of sport. Most of ITC Centers are located in disadvantaged neighborhoods or outlying development towns throughout Israel, from Kiryat Shmona on the Lebanese border in the North to Beer Sheva bordering the Negev Desert in the South.
Posted by Rick at 9:49 PM