New movie based on an inspiring true story premieres Sunday, January 29 on ABC
from Hallmark:


John Corbett (Sex and the City, Hallmark Hall of Fame’s November Christmas) plays Michigan high school football coach and special-education teacher Mike Kersjes who helps his special-ed students achieve their impossible dream: to attend Space Camp at the U.S. Space & Rocket Center in Huntsville, Ala. Their inspiring journey – based on a true story – is recounted in a new Hallmark Hall of Fame film, A Smile as Big as the Moon, premiering on ABC Sunday, January 29, 2012, 9-11pm ET/PT. 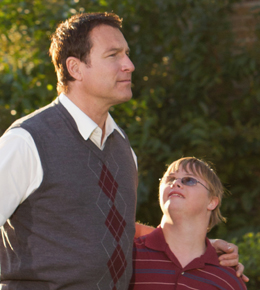 from Make it Better by MIBS:


Peter ten Brink has been a fixture on the North Shore theater scene since he began acting at age 8.
But now, a national audience will get to know the New Trier High School teen when he appears in the Hallmark Hall of Fame movie “A Smile as Big as the Moon,” airing Jan. 29 on ABC.
Ten Brink plays Ben Schmidt, a high school student with Down syndrome who dreams of someday becoming an astronaut. His teacher, Mike Kersjes (played by John Corbett of "Sex and the City" and "My Big Fat Greek Wedding" fame) is inspired by Ben’s dreams to try to get his class of special education students accepted into NASA’s Space Camp. The movie is based on a true-life account by Kersjes, who wrote a memoir of the same name.
The role came to ten Brink’s attention through the Down Syndrome Association of Los Angeles, which keeps a file of actors with Down syndrome. After finding out he was up for consideration, he took a whirlwind trip to North Carolina around Labor Day to audition. He got the call offering him the part, ten Brink said, while at McDonald’s “waiting for my Chicken Selects.”
“Ben Schmidt had Down syndrome like me. The character wants to go to Space Camp … but Space Camp is really for gifted children, not special needs,” ten Brink said. The story follows the struggles and triumphs of the class as they work toward their goal against all odds.
Ten Brink previously played the lead role in the independent short film “By Any Other Name” and also has a part in the upcoming feature length project “Nightlights,” both by Play On Productions. He got his start acting with Special Gifts Theatre, a Northbrook-based company that features actors with special needs.
He began working with New Trier’s Theatre program while he was still in junior high, landing a role in the school’s production of “The Music Man,” and has participated in New Trier Theatre classes throughout high school.
“Peter ten Brink has been very involved in our Theatre Workshop and Theatre 2: Acting courses,” said New Trier Performing Arts Coordinator Anne James-Noonan. “He is passionate about acting and has been an enthusiastic scene partner to many of our New Trier Theatre students.”
New Trier Theatre teacher Hilerre Kirsch said she has enjoyed ten Brink’s contributions to her classes.
“Peter’s passion for theatre was evident the first time I met him!” Kirsch said. “He was clearly serious about his acting and became a leader in his classes, offering advice and comments that were appreciated by his classmates.”
“A Smile as Big as the Moon” premieres on ABC on Sunday, Jan. 29, from 8-10 p.m. CST. More information about the film, including photos, interviews, and clips, can be found online at www.hhof.tv.
Posted by Rick at 9:21 AM

Email ThisBlogThis!Share to TwitterShare to FacebookShare to Pinterest
Labels: A Smile as Big as the Moon, ABC, actors, advocacy, Down syndrome, Hallmark movie, Peter ten Brink