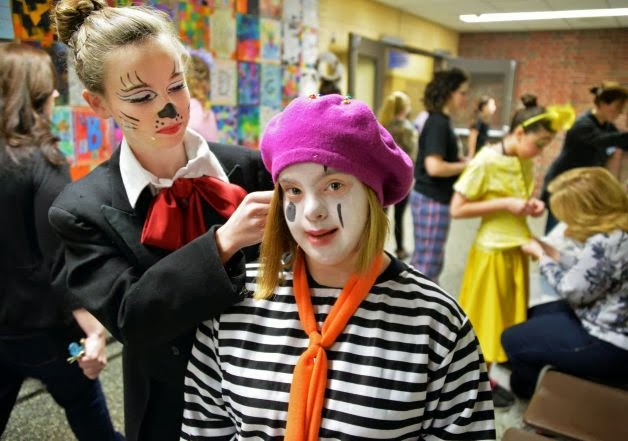 by Clarie Hughes from TimesUnion:
Emma Farman doesn't have any lines in "Seussical Jr.," a musical based on the books of Dr. Seuss being staged this weekend at Bethlehem Middle School.
The eighth-grader's role as a mime is critical, however, as she silently draws other characters into her scene in the second act. Director Lindsay Dashew didn't cut her any slack during auditions, she said. No matter that the 14-year-old has Down syndrome.
"She earned her spot in the cast," Dashew said.
Just like everyone else. Just like Emma and her family like it.
Emma's onstage role in her school play may seem striking to an outsider. But at Bethlehem Middle School it's natural, parents of special needs children said before Saturday's matinee. The play was chosen for the number of roles — 65 students have parts — with an eye to getting maximum involvement among all the kids, Dashew said. There are 40-some backstage jobs.
Margaret Perrotti, Lauren Heineman and Olivia Battista are all special-needs students who serve as ushers. It's reserved seating, so they need to pay attention to the ticket and seat numbers. Perrotti's disabilities make that job tough, so she hands out programs.
"Whenever and wherever possible, we try to place students in situations where they can be as successful as possible," said Mike Klugman, the school's principal.
Gayle Farman, Emma's mother and board co-president of a regional Down syndrome advocacy group called Aim High, believes the school excels at its efforts to include students with special needs.
"In our situation, the school has worked very closely with the parents so we can realize our vision for Emma," she said.
What is their vision for Emma? "To be fully included in all aspects of the community, in her life — to work and live and play and love in the community in which she lives," Gayle Farman said.

Emma clearly feels like a success on stage, where she is comfortable, she said. She has spent a couple of years in drama classes at Dashew's private school, the Broadway Bound Performing Arts Academy. She doesn't get any special assistance during the performance — she has to know her cues and moves. One of her parents usually sits backstage with her to make sure she's prepped to go on when her scene starts.
But she doesn't always let them.
As Emma said to her mother Saturday afternoon, shooing her away with a swing of her arm so a reporter could interview her before the matinee, "I don't need you."
The comment delighted Gayle Farman.
"It feels great," the mother said. "It's exactly what we want her to say."