Patti Saylor to be honored nationally for advocacy 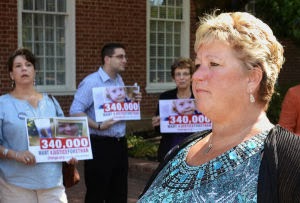 by Danielle E. Gaines from The Frederick News-Post:
Patti Saylor will be honored with the National Down Syndrome Society's Advocate of the Year award at an event in Washington later this month, the group announced Friday.
Saylor, of New Market, advocated for her son Ethan all his life, but took on a new role after his death.Ethan Saylor, 26, died in January 2013 while he was being forcibly removed from a Frederick movie theater by three off-duty sheriff's deputies.
Since Ethan Saylor's death, Patti Saylor and her family have advocated for changes in police training and for better inclusion policies, among other things.
“I'm very honored,” Patti Saylor said Friday about the award. “I think the night will be a little difficult. It will be bittersweet because of the reason.”
In September, Gov. Martin O'Malley created the Maryland Commission for Effective Community Inclusion of Individuals with Intellectual and Development Disabilities in response to Saylor's death.
The commission aims to improve first responder training and will recommend statewide training standards.
In addition, Saylor, along with other advocates, are spearheading an effort to pass Ethan’s Law in Maryland to require the additional training and push for an independent investigation of Ethan Saylor's death.
Patti Saylor understands that Ethan's death is being viewed as a turning point for disability rights and is encouraged with progress she's seen so far.
“All of the work that we've done is really making a difference,” she said. “The members of NDSS have been incredibly supportive to my family. We can't thank them enough for being the driving force.”
Saylor is being honored for her years of advocacy, according to NDSS.
In 1987, shortly after Ethan was born, Patti Saylor founded F.R.I.E.N.D.S., the Family Resource Information and Education Network for Down Syndrome, in Frederick County. After becoming a registered nurse and earning a master’s degree in special education, Saylor opened her own business, which provides case management for adults with disabilities who choose to live in their own homes and manage their own services.
Saylor has also served on the Maryland Developmental Disabilities Council, co-founded Parents Place of Western Maryland and helped advocate for inclusive education for children with Down syndrome in Frederick County.
On Friday, Saylor said it was the mothers and fathers who came before her who helped her own advocacy efforts.
“There were mothers before me,” she said. “And there will be mothers like me who will pick up the baton in the future.”
Posted by DSD at 3:00 PM