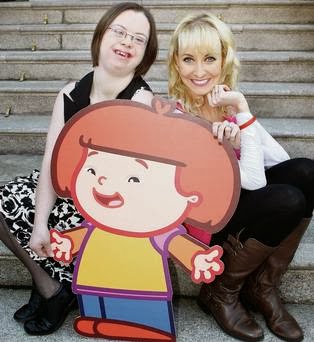 by Sam Griffin from Herald.ie:
AN Irish television programme about a girl with Down Syndrome is taking the world by storm with 10 countries now set to air the cartoon.
And the star of Punky is Aimee Richardson (31) who lends her voice to the show's main character and who herself has Down Syndrome.
Aimee says she has a connection with her character and feels a bit like Punky herself.

Aimee, who lives between Killiney and Glasthule with her parents, was selected as the voice for the show after being recommended by Down Syndrome Ireland.
"I was very excited," the student of performing arts at Roslyn College Park told the Herald after getting the nod.
"I think it's a great idea to have a cartoon series that's slotted with mainstream cartoon programmes for children and gives children an opportunity to see what it's like for a child with Down Syndrome growing up."
Punky is now set to air in Argentina, Brazil, South Korea, Turkey, New Zealand, Finland, the Netherlands, Qatar, Denmark and the US after they all bought the rights to series one.
The show has already filmed its second series following the huge success of the first and will air on RTE this Monday.
Series two of Punky will consist of 20 seven-minute shows.