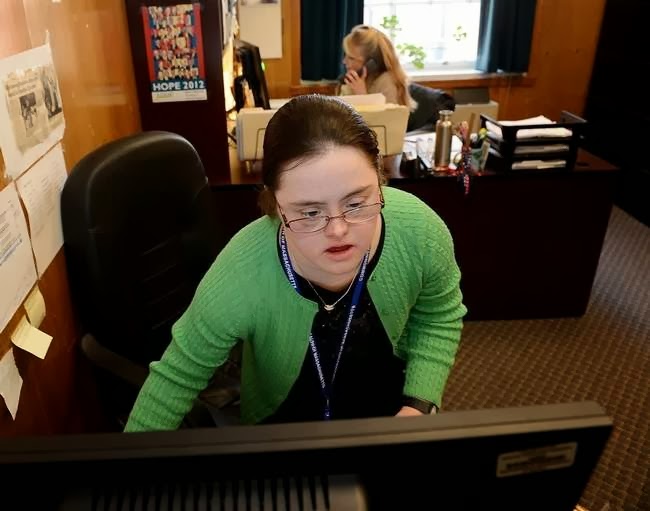 
If there were a list of the most dedicated people at the Massachusetts State House, chances are you'd find John Anton and Melissa Reilly on it.

Anton and Reilly, both adults with Down syndrome, are part-time aides in the offices of a pair of local legislators – Anton works in the office of state Rep. Tom Sannicandro, D-Ashland, and Reilly works for state Sen. Jamie Eldridge, D-Acton. During a joint interview this month in Boston, the pair was eager to talk about their work, both on and off Beacon Hill, and how they got involved in public service.

"I like the work that I'm doing," Anton, a 48-year-old Haverhill resident said. "I live and breathe work and I'm a workaholic when it comes to the work that I do."

Anton, at this point, has been hanging around the State House longer than a number of the legislators there, starting as an intern a few years ago. He's there once a week, often the first one in the office before he heads out to talk to lawmakers about bills regarding rights and services for people with intellectual disabilities.

Reilly, 27, of Boxborough, is also in Boston two days a week, working as an aide in Eldridge's office. Reilly does database work, maintaining records for constituent services that keep track of how the senator's office has responded to issues in the district. She also pitches in on other jobs, like making deliveries to other lawmakers.

Reilly, a member of the Self-Advocate Advisory Council at the Massachusetts Down Syndrome Congress, also speaks at events and gives talks to medical students and physicians about what it's like having and growing up with Down syndrome.

Anton said that he has recently pushing lawmakers to shore up funding for the Disabled Persons Protection Commission. He said he is also pushing for the passage of the Real Lives bill, legislation filed by Sannicandro that aims to give people with disabilities greater control over the care and services they get.

"We need to have more say in the services that we get from the department of developmental services," he said. "I want to encourage movement on the bill and get it passed this year."

Anton, who has also served as a Congressional intern in Washington D.C., was honored last year with the Allen. C. Crocker Award of Excellence, the highest award given by the Massachusetts Down Syndrome Congress. He is heading back to the Capitol again this month to lobby for the passage of the Achieving a Better Life Experience Act, which would allow the use of tax-free savings accounts by people with disabilities.

Reilly has been working as a paid staff member in Eldridge's office since May, but interned there for about two years prior.

"I love being here and working for a great boss/senator and friend," she said. "The staff is really nice and really great."

Eldridge said that Reilly has acted as an ambassador for the office, building up relationships with other offices that have proved very helpful. He said that he also admires the advocacy work that she does inside and outside the office.


Eldridge said that shortly before Reilly's interview with the Daily News, a group of constituents with disabilities came into the office. He said that it was "particularly powerful," to watch their reaction when they come in and meet Reilly and "see somebody working in the office just like anyone else."

Eldridge recalled a talk Reilly gave to the Greater Waltham Arc last year, saying that Reilly embodies and demonstrates the path to independence for several people with disabilities.

"It was just great to see the individuals in that room really respond to that," Eldridge said.

Maureen Gallagher, executive director of the Massachusetts Down Syndrome Congress, said that both Anton and Reilly are both heavily involved in the advocacy work done by the MDSC and have taken on public roles within the organization.

"We're extremely proud of both Melissa and John – they have been wonderful ambassadors," she said. "They exemplify the mission of the MDSC… They are living their dreams."

Sannicandro, in an interview last week, talked about the cultural attitude toward people with intellectual disabilities.

"As a society and a culture in many ways we tend to be paternalistic about people with intellectual disabilities," Sannicandro said. He said that in particular, the Real Lives bill aims to adjust that by giving the client more control over the services they receive.

"What this bill does is say once they set your budget, you have control over it," he said. "There would be folks to help you do that, but you are the guy driving the bus."

He said that Anton and Sannicandro, in addition to serving as valuable assets, show the increasing number of paths becoming open to people with intellectual disabilities, although he was quick to say that the work still left to be done is daunting.

"It's amazing in a lot of ways to see someone working in this type of position," he said. "I think we have made tremendous progress, but we still have so far to go."

Most importantly, Sannicadro said, Anton and Reilly have a lot to contribute to the conversation on Beacon Hill.

"They add so much to the dialogue and so much to the work we are trying to do at the State House," he said. "These are two individuals who are really making a difference in the work that they do."