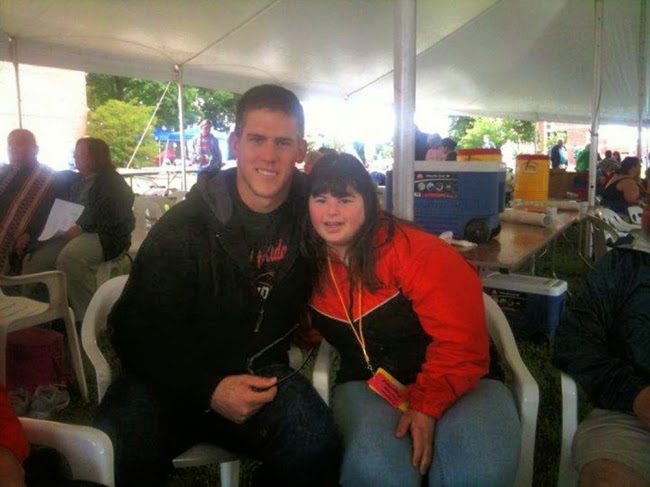 by Jeff Roberts from The Record:
The voice on the other end of the phone kept him going.
Every night Steele Divitto made the call, sitting in someone else’s house, lounging on someone else’s bed.
The former Don Bosco linebacker spent the winter back in New Jersey, chasing his dream of reaching the NFL. His two-a-day training sessions for Boston College’s March pro day had him run all morning. Lift in the afternoon. Squeeze physical therapy in between. And then he would return to the gym at 8 or 9 p.m. for one-on-one workouts.
But at the end of each grueling day, Divitto knew his older sister, Collette, was waiting to hear from him. She was born with Down syndrome, but never allows it to stop her from doing anything. So Divitto cannot allow anything to stop him.
"She’s a huge inspiration," he said. "She’s one of the most amazing people in my life. I’m so blessed to have her. I’m her biggest fan. She’s my biggest fan.
"At the end of the day, I do it for her."
The 6-foot-2, 241-pound Divitto finds himself in no-man’s land as May’s NFL Draft approaches. The Connecticut native is projected as a late-round pick or a rookie free agent, knowing the difference could determine the course of his future.
Draft selections often receive opportunities to earn roster spots and playing time that rookie free agents do not.
So every day before Divitto’s March 12 pro day — "my combine basically" — was a chance to cut his 40 time by a tenth of a second, to raise his vertical by an inch.
Although his specific pro day measurables were not available, he believed he reached his goal of running a 4.7 40.
Divitto already had put together a sound résumé.
The three-year Boston College starter earned All-ACC third-team honors as a senior from the league’s writers and honorable mention from the coaches. He led the Eagles in tackles (112 tackles) and recorded six tackles-for-loss and three sacks.
"He’s a very serious football player," said tight end Mike Naples, a Boston College teammate and friend. "He’s very serious in the classroom, watching film. He’s a good, solid linebacker with solid instincts who hits hard."
Divitto is no stranger to sacrifice.
To play for Don Bosco, he stayed with teammates’ families during the season and commuted from Connecticut every day in the off-season. He still became an All-American at the national powerhouse.
"I just know wherever I go, I’m going to outwork everyone," Divitto said. "This is my dream, and I’m following my dream."
He stayed at the Naples family’s Branchburg home for two months during his pre-pro day workouts at TEST Sports Clubs in Martinsville. Naples said they were at the gym from 8 a.m. to 6 p.m. five to six days a week.
"They told us to pitch a tent because we were there so long every day," Naples said. "We’re both pretty serious about football, and we’re both pretty serious about working out.
"To play in the NFL, football has to come first."
Collette has driven Divitto this far.
She attacks "every day with a smile on her face," working a full-time job at an elementary school, he said. She is selfless and unflinchingly honest.
And Collette motivates him by constantly reminding her brother that he "needs to focus."
"She’s always trying to keep me in check. And I love it," Divitto said. "I wouldn’t trade her for the world."
Maybe the elbow he dislocated in September bothered him a bit during training. Maybe loosening his tight hips to make him faster — the biggest question surrounding him is speed — was a grueling process. And maybe he had to study his running form ad nauseam on an iPad — his nose nearly touching the screen — scouring every slow-motion frame to ensure he had proper extension.
But if Collette can soldier on without a complaint, so can he.
"Honestly, I wish everyone had a Collette," Divitto said.
Posted by DSD at 3:00 PM