Portrait of a community hero 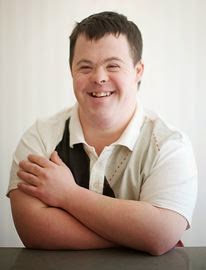 When Lisa Maloney read the criteria for the Canadian Down Syndrome Heroes award, she knew someone who fit the bill exactly: Kevin York.
“Kevin meets all of the requirements to be a hero in our community,” said Maloney, the volunteer co-ordinator with Community Living Huronia (CLH). “He certainly is a great role model for members of our community, his peers, and family members that have a child or siblings that have Down syndrome.”
The genetic disorder is caused by the presence of a third copy of chromosome 21. It is typically associated with physical growth delays and some intellectually disability.
Maloney said York “is the perfect example that people with exceptionalities have skills and abilities to give to the community.”
The long list of organizations and activities for which the Midland resident volunteers includes CLH’s charity golf tournament, the Salvation Army kettle drive, the Rotary Club’s Party on the Dock, and many others.
Maloney said York is particularly effective pounding the pavement to collect prizes and sponsorships for the golf tournament.
Cathy York said she can’t remember exactly when her son started volunteering, likely with CLH, but it has since become a key part of his life.
“I have said to him it’s good to do things for others, because a lot of people do things for him, but he just ran with it. Kevin loves it. He likes to meet people and he loves the social part of volunteering.”
Previously, York never went anywhere without his mom, but now he goes to the mall, the movies and Tim Hortons on his own. After discussing options with his mom, he later finds his own way home from his many activities.
“His friendship list is miles long,” Cathy York said. “I don’t worry. Everyone knows him and he has a friend on every corner.”
Indeed, in the nomination package for the award, Doug Andrews wrote: “Walking down main street in Midland, you think you are with the ‘King of Kensington.’ (Kevin) is respected and known by community members from all walks of life.”
Cathy York said she was surprised to learn of the nomination, and while she is frequently told how much her son is appreciated, it was wonderful to read all the nice things people had to say about him.
Winners will be announced later this week in time for World Down Syndrome Day on March 21.
Posted by DSD at 6:00 AM