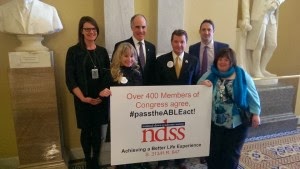 by Mari-jane Williams from The Washington Post:
Last week several hundred disability rights advocates were on Capitol Hill to support the Achieving a Better Life Experience Act. The current version of the bill was introduced in February 2013 and would allow individuals with disabilities or their families to open a tax-sheltered savings account to pay for certain long-term expenses.
Sara Wolff, a woman with Down Syndrome who has collected more than 200,000 signatures on Change.org in favor of the ABLE Act, was on Capitol Hill on Feb. 27 to rally support for the bill.
The accounts would be similar to the current 529 program that allows families to save for college education, and would be called 529A accounts, said Sara Hart Weir, the vice president of advocacy for the National Down Syndrome Society.
I spoke with Weir by phone this week about the ABLE Act. Here are edited excerpts from that conversation.
What would the ABLE Act do?
It’s basically amending Section 529 of the tax code to create a specific account for people with disabilities. In order to qualify for a lot of services, folks can only save $2,000 in assets and earn $700 a month. That’s way below the poverty line. The current law dates to 1974, and it was a way to qualify for Medicaid
eligibility. From the day a child is born parents are told not to put assets in that individual’s name because it could make them ineligible for benefits. It’s a complete disincentive to employment and work. They can’t save any money they earn. This account would let them put money aside for long-term expenses that Medicaid and Supplemental Security Income don’t cover, things like education, housing, a job coach or transportation. The types of expenses covered are enumerated in the legislation. … For our population, the money is meant to be used over the course of the person’s lifetime, not just for education.
What would its passage mean?
The ABLE Act is so much more to people with Down Syndrome and other disabilities than just a savings account. It puts a stake in the ground so people can live independently, work, go to college. It’s time to move into the 21st century and allow individuals with disabilities to be self-determined, and not let these laws hold them back.
We need to allow individuals to be as economically self-sufficient as possible. They can put their paychecks in these accounts. We’ve heard stories about individuals who turn down promotions or raises because they are so afraid of going over that $2,000 limit on their assets or earning more in a month than they are legally able to.
How will the ABLE accounts be different from a traditional 529?
These accounts are going to be far more transactional, as far as when you can take the money out, as long as it meets the requirements as a disability-qualified expense. It will work more like a health savings account, where you save your receipt and get reimbursed and include the information in your taxes.
Will parents be able to move money from a traditional 529 to an ABLE account?
Yes, there is a provision for rollovers, especially for parents who get a diagnosis after the child is born such as autism.
Where do things stand now?
We have more than than 400 co-sponsors in Congress…. Any day we should be receiving our Congressional Budget Office score. As soon as we get that, we have commitment from the House and Senate leadership to move this forward to a vote…. We’ve been working on it, and it’s gone through several iterations, for eight years. This is the year we’re going to get it done.
Posted by DSD at 7:00 AM