Separating a Son From a Down Syndrome Diagnosis in ‘Raising Henry’ 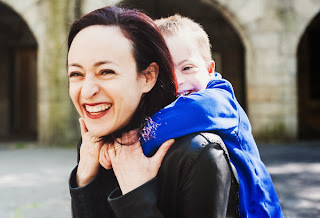 From the NY Times by Susannah Meadows:
Rachel Adams is an Upper West Side intellectual who gave birth to a boy with Down syndrome six years ago. In this era of advanced prenatal screening, the first question more than one friend asked her was: How could this have happened?

On the surface it seemed like an expression of concern. But what it meant was: How could this child have happened?
To Ms. Adams, the idea that her son’s very existence requires an explanation — that he is here because of some failure of medical science — is appalling. Her book is less a memoir about mothering a child with Down syndrome than it is her attempt to set people straight. The syndrome is a disability, as she makes clear, not an illness and certainly not a tragedy.
“Raising Henry” is an important, hopeful book for that reason alone, and it’s easy to be on Ms. Adams’s team. Sometimes, though, you wish she were a more effective captain.
A professor of English and American studies at Columbia, she seems most at home making an argument, drawing on research (especially her own), seeing connections. She observes that in the brainy circles in which she moves, everyone talks about diversity — but how much are differences really valued? “I wonder,” she writes, “whether my friends and colleagues would recognize the value of a child who was slower, less capable and more dependent.”
And while she makes many good points, she leaves her most compelling evidence, her case-closer, largely out of the picture: Henry himself. She writes that her son is separate from his diagnosis, but barely offers a sense of who he is.
One quick glimpse comes midway through the book, when she writes that no genetic test would have told her about the essence of Henry: “I couldn’t have known about his great sense of humor or the sound of his infectious laugh. Or the smell of his hair. The delight he gets from singing along with music or pouring bathwater from one cup to another. His weight on my lap when we’re reading a book together.”
That’s the stuff. Too bad there is so little of it. Comparisons with the vivid characters who populate the 2012 book “Far From the Tree,” Andrew Solomon’s magnificent study of disability and identity differences, are hard to avoid. People like the autistic child who tells his mother “I love you” shortly before she dies, or the woman who starts her own school to meet her deaf son’s needs, make Mr. Solomon’s weighty volume, implausibly, a page-turner.
When Ms. Adams was pregnant with Henry, her second child, she and her husband, Jon, decided to skip an amniocentesis, which would have identified the extra chromosome that causes Down syndrome. She’d had the test during her first pregnancy and was repelled and terrified by the long needle stuck into her abdomen; anyway, an early screening in the second pregnancy suggested that the odds for Down syndrome were just one in 2,000. She doesn’t say whether she would have had an abortion had she known, or what her husband would have wanted to do.
A dispiriting subplot of the memoir is the author’s growing disillusionment with doctors. She comes to trust her own instinct above their advice — and no wonder, given their abysmal bedside manner. For instance, the resident who sews her up after the delivery sprints out of the room faster than you can say “perineum”; she realizes later that he must have known that Henry had Down syndrome but lacked the courage to break the news.
When Henry was 3 days old, a pediatric geneticist used him as a teaching prop for a group of residents: Pointing out a characteristic of Down syndrome, “he reached into the incubator to demonstrate the floppiness of Henry’s limbs by lifting them and letting them drop.” Neither he nor the residents uttered a word to Ms. Adams as they continued on their rounds.
Her obstetrician’s performance was hardly better. Visiting Ms. Adams after the birth, she burst into tears — which, although odd, at least seemed sympathetic. But soon the doctor’s attention shifted to herself. “I went back through all your records,” she said. “I wanted to make sure I didn’t miss anything so I showed them to my colleagues, and everyone agrees there was nothing.”
At that moment, Ms. Adams says, she hated her obstetrician. Later she reconsidered, reasoning that if the doctor had pushed her to have an amnio, she might never have had Henry. She even wrote the doctor a thank-you note.
But the feeling didn’t last. After talking to another mother of a child with Down syndrome who happened to be a patient of the same obstetrician, Ms. Adams realized that those tears were not out of worry for the challenges the new mother faced, but rather out of regret that Henry had come into existence at all.
Ms. Adams never saw that doctor again, but with this book, she gives her a well-deserved piece of her mind.
Posted by DSD at 6:00 AM