Moms AIM to help kids with Down syndrome 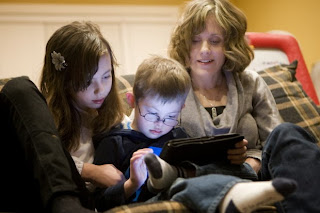 by Johnathan Charlton from The StarPhoenix:
When Christy Waldner learned her seven-day-old daughter had Down syndrome, it felt like a slap in the face.
All she could think of was a low-functioning boy she went to school with who was cruelly teased and taunted into swearing for the amusement of others.
“That’s the first thing that popped into my mind, how this boy didn’t have great speech but the thing he could do was swear and everybody thought it was funny.
“That’s what I thought, instantly, about my daughter — that she would be bullied and teased and it would be a negative experience.”
The reality for the Muenster family is fortunately quite different.
Sydney is now a happy, funny 15-year-old who plays soccer and volleyball with her friends at school (she can serve overhand, Waldner notes proudly) and wants a horse for Christmas.
But the journey was a challenge, with few services for the family in Saskatchewan.
Now, Waldner and Saskatoon parent Tammy Ives have started the non-profit Ability in Me to help other families.
“The two of us together started moving ahead. It was amazing the people we ran into and connected with,” Waldner said.
If everything goes according to plan, they’ll hire two speech pathologists, a certified teacher and an educational assistant when they open next September.
Ives’ six-year-old son Alexander “needs to see things or do things hundreds of times more than a typical kid,” Ives said.
There’s not much one-on-one speech therapy in schools, and while Alexander goes for private therapy, not everyone can afford that, Ives said.
They’ve modelled AIM after Calgary-based organization PREP.
Sydney was one year old when they first went to PREP and saw the level of service and the expertise the centre has, Waldner said.
“You walked in the doors and it felt like a breath of fresh air. They were able to teach us and help us, it was just incredible.”
When they later accessed services in Saskatchewan, there was no comparison, Waldner said.
PREP’s expectations were high, which boosted the family’s hopes for Sydney — that she’d progress and be able to contribute to society.
“It was like night and day. It was like, oh my gosh, we need this.”
They have a business plan, a volunteer board and have met with the Ministry of Education and early childhood intervention programs.
They held their first information session in October.
Twenty-five parents have signed up so far, and AIM should have a capacity for 110 kids.
Ability In Me will be based in Saskatoon but hopes to operate across the province.
Details about the costs haven’t been finalized, but Waldner doesn’t want money to be a barrier for families.
More information is available at aimprogram.ca.
with files by Sean Trembath
jcharlton@thestarphoenix.com
twitter.com/J_Charlton
Posted by DSD at 6:00 AM

Email ThisBlogThis!Share to TwitterShare to FacebookShare to Pinterest
Labels: Ability in Me, AIM, Down syndrome, PREP, Saskatoon, support group, Waldner