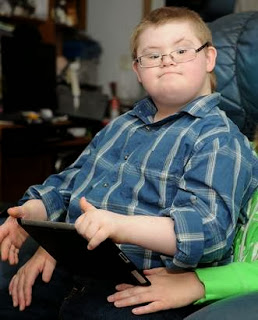 by Leonard Hayhurst from the Conshocton Tribune:
KEENE — Wyatt Guilliams, 11, likes taking pictures and photos on his iPad, revels in playing games on his Xbox, and says he can’t wait for Christmas to come.
That’s all typical for a boy his age, but what isn’t typical for the Warsaw Elementary School fourth-grader is his duel with a rare brain disease called moyamoya syndrome.
Wyatt has Down syndrome and related growth and development problems. It was through medical tests for his low growth hormone levels that the moyamoya, which causes strokes because of blocked arteries at the base of the brain, was determined in August.
Wyatt had surgery to restore blood flow in October, but it will be about another six months before it’s known whether surgery was successful. If not, another surgery might be needed.
Right now, Wyatt seems to be his usual self, said his mother, Tammy Guilliams. Wyatt has returned to school but can’t participate in gym or recess because he has to be careful with physical activity.
Guilliams is shifting gears to focus on awareness of the disease and has started a Facebook page to do so, called Wyatt’s Battle. Guilliams also has made fliers about the disease and distributed them at Wyatt’s school and is a member of a moyamoya support group on Facebook.
“There’s so little knowledge of moyamoya,” Guilliams said. “We’re all trying to get knowledge out there so (medical facilities) can get research funding and more training. We hope they can find something to cure it or something to fix it that’s a guarantee.”
According to the National Institute of Neurological Disorders and Strokes, moyamoya can be fatal if left untreated. Victims will experience mental decline and multiple strokes as blood vessels continue to narrow. Studies show moyamoya affects about 1 in every 2 million people in the United States. The name is Japanese for “puff of smoke,” which describes what the tangled, small vessels look like that develop in the brain to compensate for the blockage.
“It’s actually the weirdest looking thing,” Guilliams said. “We saw Wyatt’s MRIs, and that’s what they looked like: a puff of smoke.”
Wyatt’s surgery involved taking a blood vessel from his face and attaching it to his brain to grow new arteries to bypass the blocked ones. It was an eight-hour surgery.
“The neurosurgeon said after the surgery (Wyatt) was so far ahead of the game. He came out of surgery and all he wanted to do was eat,” Guilliams said with a laugh. “They were hooking him up to things in intensive care, and he was saying, ‘Where’s my mom, where’s my mom?’ and I said, ‘I’m right here.’ I squeezed around all the doctors and nurses and he said, ‘See mom, I tell you I wanted breakfast, and now it’s supper time.’ ”
Guilliams said they were lucky a neurosurgeon, Lance Governale, at Nationwide Children’s Hospital in Columbus had training in the technique from when he worked at Boston Children’s Hospital. Guilliams said she has found other families online who have to give up almost everything they own so they could travel to Boston or Stanford, Calif., for treatment.
It brings tears to her eyes to think of the people who supported Wyatt and the family — which includes Wyatt’s father, Mike Guilliams, and his older brother, T.J. Guilliams — during his hospital stay. A benefit auction and card shower were organized by Kenny and Marie Roberts. The Coshocton Army Navy Garrison donated its facility to host the auction.
Tammy Guilliams said the family received more than 50 cards, many from people they didn’t know. Several of the cards contained money, and Wyatt was able to go on a celebratory shopping spree after being released from the hospital. Other donations helped the Guilliamses pay bills, travel back and forth, and buy needed essentials while Wyatt was at the hospital.
“I can’t even express the gratitude we have for the people in this community. You hear so many bad things about Coshocton, but when it comes down to it, the people in Coshocton are great,” she said. “People we’ve never met, you can’t believe how much they care.”
llhayhur@coshoctontribune.com
Posted by DSD at 6:00 AM