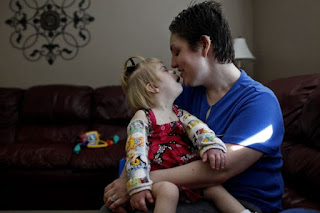 from My S.A. by Elaine Ayala:
Stephanie and David Barnett didn't plan to adopt. The San Antonians weren't even sure they'd have children.
“I loved little kids, my nieces and nephews,” said Stephanie Barnett, 37. “But at the end of the day, I was ready to give them back.”
God, as she often says, had other plans, which slowly emerged over their 15-year marriage. “For years at a time, we got pieces of the puzzle,” she said.
Five major parts of it are named Copeland, Silas, Teague, Trenton and Maclayne.
Four of them have Down syndrome and of those, three were adopted from an Eastern European orphanage last year.
The Barnetts — members of Shearer Hills Baptist Church; she a former teacher, he an accountant — believe God assembled their family.
They didn't jump headlong into adopting special-needs children. They reflected. They prayed. Stephanie Barnett got past lifelong dreams of becoming a missionary. She suffered a miscarriage. They prayed some more.
Copeland Shane Barnett was the first. At 10, he's a fifth-grader in the North East Independent School District. He's also their only non-Down syndrome child. Born in Texas in 2002, he arrived at age 6 weeks by way of a relative and attorney helping place the child.
After Copeland, the couple knew they'd adopt again, but it would take six years to decide on a Down child.
Stephanie Barnett, a former high school English teacher who also taught reading to special-education students, gained perspective on the challenges such children face and the resources that would be needed.
Her husband struggled with it.
“I wanted to make sure it wasn't an impulse,” said David Barnett, 44.
By mid-2008, he was ready and texted his wife “out of the blue,” she recalled. “I called the Down syndrome association and asked about adoption agencies.”
Silas Eli Barnett, 41/2, arrived that same year. The handsome fellow came to them via an adoption agency. He, too, was born in Texas.
Family resistance brought heartache. The relatives who helped with their first adoption wouldn't serve as references for the second.
Stephanie Barnett handled criticism by saying, “'You're either with us, or without us.'” That family situation is a work in progress.
Then she read an article in People magazine about Andrea Roberts, founder of Reece's Rainbow, a nonprofit that assists international adoptions of special-needs children.
Getting their next three kids adopted and to the United States was expensive. God provided, the couple said. Stephanie Barnett quit her job and pulled out her retirement pay. David Barnett received a small inheritance.
Their five adoptions cost about $100,000.
“God gave us this call, specifically the last four,” she said. “If we did not adopt, to us, it would be our sin.”
It took only nine months to adopt Teague Josiah Barnett, 6; Trenton James Barnett, 4; and Maclayne Faith Barnett, 41/2.
Maclayne is the only girl and the only Barnett child not in school yet because of her medical condition. Nicknamed “Mackie,” some of her brothers also call her “Mac Attack.”
She weighs 21 pounds, has hypertension and is recovering from surgery that repaired holes in her heart. Her journey may have been the toughest but that can't be detected in her deliberate, bear-like hugs. Delicate she is not.
Mackie doesn't speak. A year ago she didn't even make noises. She couldn't sit up and was kept on the floor caged in by slats resembling a make-shift crib.
Mackie had sores on her shaved head. “She was self-injurious. She would pick at herself,” Stephanie Barnett said. “She was abused in the orphanage.”
David Barnett is a little uneasy with that assessment but acknowledges Mackie was fed a “gray gruel.”
“They poured a bottle down her throat,” he said, and used one better suited for feeding young livestock.
Mackie is now fed through a nasal-gastric tube, because she resists eating. That's another work in progress.
Those who treated Mackie at Methodist Children's Hospital consider her a miracle child.
“When they adopted Mackie she was 31/2 years old but weighed only 12.1 pounds,” JoAnn King, a spokeswoman for Methodist Healthcare, said in an email.
Born to a prostitute and alcoholic, Mackie also has Fetal Alcohol Syndrome.
“When her mother gave birth to her, she put her in a closet to die,” King said. “But neighbors heard noises and thought maybe a cat was stuck in the closet.”
She was found three days later.
“It also appears surgery was done on Mackie,” King said, noting the scar on her chest. “No one would tell the Barnetts about the surgery or scar.”
Had they not been adopted, all three children from that country would have been placed in a mental institution by age 4.
“Socially, they are unaccepted,” said Terri Mauldin, executive director of the Down Syndrome Association of South Texas, which serves 900 families with in the San Antonio area. “They're considered inhuman.”
The Barnetts are soundly anti-abortion.
“Here's where I have to get on my soapbox,” Stephanie Barnett said, then added, through tears, “In the United States, 90 percent of women have abortions when they find out (about a prenatal Down syndrome diagnosis). ... I have four children not worth life?”
Mauldin said the 90 percent statistic was true several years ago. Today, through education and awareness, it's down to 70 percent.
David Barnett wants people considering adoption of special-needs kids to know that children with Down syndrome are “regular kids.”
“Sure, your life changes,” Stephanie Barnett said. “But it will change with any child. We've been living in a Downs' world for 41/2 years now. We have become better human beings in the last 41/2 years than in our entire lives.”
Mauldin, the mother of a Down child, added those children can grow to hold jobs, learn in school and be successful.
They also fill a role society desperately needs, she said.
“They're nonjudgmental. They don't hold a grudge. They're kind to everyone. They are exactly what we as humans should be.”