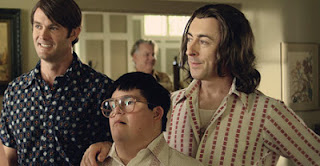 by Gregg Shapiro from GA Voice:
This year ends on an especially high note for LGBT film with “Any Day Now” (Music Box Films), starring out actor Alan Cumming as Rudy, a gay West Hollywood man who must deal with a prejudicial and antiquated court system as he attempts to adopt a boy with Down syndrome in 1979.
Cumming gives the performance of his career and even has the opportunity to sing a couple of numbers in the movie.
“Any Day Now” is written and directed by straight filmmaker Travis Fine, an Atlanta native, based on an original screenplay by George Arthur Bloom.
“There was something that drew me to this notion of this outsider trying to raise this child, trying to save this child — the Rudy character and the young boy being outsiders,” Fine says, noting that he added the character of Paul, Rudy’s closeted partner, who was not in the original script.
“There was also something in the situation that moved me as a parent,” he says. “I wasn’t exactly quite sure why it spoke to me, but it did in a deep profound way.”
The film is set in 1979 West Hollywood, but could just as easily have taken place in 1989 or 1999. Fine said he chose to keep the earlier time period because the original screenplay was based on a true story, and to explore “the gritty, character-driven” style of 1970s cinema.
“From a political point of view, the story would be different, certainly in Los Angeles in 2009 or 2012,” Fine says. “But as we all know, there are still certain places, even within this country, where the story wouldn’t be that much different. There would be some of the same challenges and hurdles and obstacles.”
Fine says he was thrilled to have openly gay actor Alan Cuming in the lead role.
“As a straight filmmaker who had the honor of telling an important, profound and moving story about a chapter in the late ‘70s of the LGBT movement, it was incredibly important to have Alan take on that role,” Fine says.
“Not only is Alan a sensational actor, an incredible talent and a wonderful human being, but he’s an OBE, an Order of the British Empire, knighted by  the Queen for his work on LGBT rights and equality,” he says. “He is not just giving lip service to equality. He has fought that fight and been a vocal champion and proponent of equality and LGB T rights.”
Rudy begins carrying for Marco, a teen with Down Syndrome, after he visits a neighboring apartment to complain about noise and finds the young man abandoned by his mother. Isaac Levya’s performance as Marco is “brilliant,” Fine says, noting that he edited the character to fit the actor.
“We put out a nationwide search for the kid, both through traditional agents and managers and casting directors around the country and also through the Down Syndrome Associations all  around the country,” Fine says.
“We saw people as young as 12 and 13 and some that were  as old as their mid-20s. Isaac, from his very first reading which I saw on my computer, his first audition tape, there was something so charming, so sweet and honest about his performance,” he says. “It didn’t feel like acting.”
“Any Day Now” has won several awards at film festivals, has crossover appeal and the potential to be remembered fondly at Oscar time. As the film heads to wider release this month, “I hope the audiences find it,” Fine says.
“While it can be challenging to sit through at times, and it certainly covers some heavy political and emotional and personal issues, it is ultimately a crowd pleaser.”
The movie opens December 21.