Ohio baby receives 400 ornaments from around the world 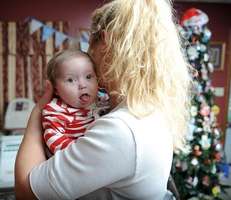 by Holly Richards from Newark Advocate.com:
His eyes bulging, taking in hundreds of colorful ornaments adorning a bright Christmas tree, Sebastian Longstreth extends his tiny fingers to a glittering red bulb.
“None of our ornaments are on there — they’re all his,” said Shannon Longstreth, Sebastian’s mother.
For the past month, 11-month-old Sebastian has been receiving hundreds of Christmas cards and ornaments from around the country and world.
“His Facebook page has 7,829 ‘likes,’ and everybody was asking what to get him for Christmas,” Longstreth said. “I thought we should give him his own tree, and ask people to make, buy or take ornaments from their trees to send. There are a lot of handmade ones, and we have close to 400 now. We’ve even started hanging them on the banister.”
Longstreth said local people are giving, and mailboxes are filled to the brim daily with gifts from every state. International packages have been received from England, Ireland, Australia and other countries.
This is another example of support the Longstreth family has received, even before Sebastian was born. On Jan. 23, Shannon and her husband, Brandon Longstreth, welcomed their third child. She was five months pregnant with Sebastian when a blood test revealed he had Down syndrome.
“I wasn’t shocked about the Down syndrome diagnosis, but it was the heart issues that bothered me,” Longstreth previously said. “That was heartbreaking. He has an atrioventricular canal defect, but he’s had surgery, and it looks great. He’s a fighter. I don’t treat him like he’s ‘special.’ I treat him like a baby.”
After Longstreth uploaded photos to Facebook shortly after Sebastian was born, they quickly received 112 “likes.” She started the Sebastian’s Journey page on Facebook, which had 82 “likes” in 15 hours. Now, he’s up to almost 8,000 “likes,” from a mix of familiar faces and strangers.
“The public’s been great, and I pay attention to people I receive messages from,” Longstreth said. “I try to recognize them and respond to them all. These people really support me, and one — Phillip McCloud — gave us a new refrigerator. Without social media, I’d be lost. It’s amazing to have someone out there who is concerned about us.”
Facebook also has given Longstreth her “guardian angels,” Dona “Mimi” Joseph and Kelly Treadway. They started out as strangers who happened to live nearby, and now there’s almost no one Longstreth feels closer to. Each followed Sebastian on Facebook and reached out to Longstreth, wanting to be involved in the child’s life.
After Joseph’s husband died in July, she questioned if she would find love again. A month later it came in the form of young Sebastian. Joseph and Treadway have become daily visitors who sit with him so Longstreth can tend to her family and herself, giving her respite from Sebastian’s around-the-clock care.
“It’s a different world,’ Joseph said. “He’s a godsend to us. He was meant to come into my life when he did.”
“We’re here to help with whatever they need,” Treadway said. “I feel like he’s my grandchild, too.”
Angela Smith, a home nursing caregiver with Maxim Healthcare, of Newark, is at the Longstreth home 40 hours each week to assist with Sebastian’s needs. She already has seen him make great strides and looks forward to many more.
“He’s a remarkable client, so strong and happy,” she said. “He has the potential to get better. Being here gives me a sense of purpose, and this family has become my family.”
As Sebastian rested comfortably on Joseph, Treadway and Smith helped Longstreth open mail and hang the ornaments that continue to pour in. They are floored by the response so far.
“I feel the love on this tree,” Longstreth said. “He really is Zanesville’s baby. He’s touched so many people.”
hrichards@centralohio.com
740-450-6772
Twitter: @hmrtr
Posted by DSD at 1:41 PM