Don't label people with Down syndrome 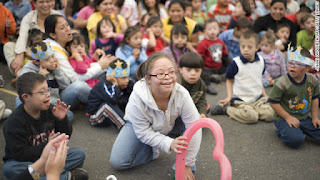 By David M. Perry, Special to CNN:
"It breaks my heart to think how many people would not have chosen to keep that precious angel." -- Florida Attorney General Pam Bondi, speaking about abortion and Down syndrome at the 2012 National Convention.

"I highly approve of (Mitt) Romney's decision to be kind and gentle to the retard." -- Ann Coulter, tweeting about the third presidential debate.
"No one would call someone with Down syndrome 'retard.' I call you a 'retard.' " -- Coulter on Alan Colmes' Fox News Radio show.
Let's pretend that Ann Coulter is telling the truth in that last comment. Yes, she called President Barack Obama a retard, but at least she claimed she'd never insult someone with Down syndrome. Even if she's lying, we have come a long way. Children with Down syndrome still get bullied or even abused, and adults with any disability face an uncertain future, particularly in an era of austerity, but today few would call someone with Down syndrome a retard to his or her face.
For this, as the father of a boy with Down syndrome, I am grateful.
In fact, over the last 50 years or so, the lives of people with Down syndrome and other disabilities have improved in many remarkable ways. Most parents are now raising their children with Down syndrome in their homes rather than sending them to live in institutions. Government programs, especially through early intervention and special education, employ teachers and therapists who have helped these children learn beyond our wildest dreams.
Medical advances not only prevent many of the most dire threats to their health but begin to promise new treatments to make it easier for them to learn. Extended families, churches, community groups and nonprofits all work to support families such as mine.
And sometimes, when relatives or church members or kind strangers meet my son or hear that I have a boy with Down syndrome, they smile and tell me that "people with Downs" or "Downs kids" are God's angels sent down to earth. I smile and thank them and agree that people with Down syndrome can be pretty great.
But while good intentions count for a lot, "angel" makes me no happier than "retard." Most parents who have spent time changing diapers, dealing with tantrums or trying to get a sleepy child, with or without Down syndrome, ready for the school bus in time know that "angel" doesn't always cut it.
People talk about Down syndrome "special angels" or "hidden angels" across the Internet and media. Reece's Rainbow Adoption Ministry, an organization that does spectacular work finding homes for orphan children with Down syndrome, has an "angel tree" on its website, with pictures of children in need of adoption. The founder writes, "The beauty and innocence that a child with Down syndrome brings to the world is truly one of Divine nature." This is a little more complex than "angel," but the focus on innocence points in the same direction.
No human, including my son, is entirely innocent or angelic.
Symbols, labels and representations -- in media, literature and our daily conversations -- shape reality. The words "retard" and "angel" represent images that dehumanize and disempower. Both words connote two-dimensional, simple or limited people. Neither angels nor retards can live in the world with the rest of us, except as pets, charity cases or abstract sources of inspiration.
I am delighted to see the tide turn against the "r-word." After Coulter tweeted about the president, John Franklin Stephens, a man with Down syndrome, took to the Internet and to CNN. He argued that comparing the president to people such as him ought to be a "badge of honor" given the pathways he has forged through life's complex problems. The wave of support and publicity received by Stephens gives me hope for my son and for all of us who think our lives are improved by a society that includes everybody.
Language changes as knowledge and attitudes change. Doctors started using the word "retarded" to replace "Mongoloid Idiot." A lot of good came with that shift, because it indicated a new understanding that people with Down syndrome were not monstrously limited creatures best locked up in an institution.
Today, we talk about "developmentally delayed," and a lot of good has come with that shift, too. People see a child with developmental delays as having the potential to learn, to grow, to develop and to become a self-advocate.
And even Coulter, as a result, claims she would never call my son a retard. But other words will replace it. People will find new ways to use language to divide, to objectify and to dehumanize. The issue isn't language, not specific words, but representation.
My son is neither angel nor monster, just human. It's true that he's more confident in the world of empathy than of language. He reflects and intensifies the emotions of those around him. He meets love with even more love. These traits can be wonderful, and they're pretty typical of people with Down syndrome. But complex emotional lives define us as human, not angelic.
So let's listen to the rueful laughs of so many of my fellow parents who insist: "My child is no angel." Let's stand with Stephens as we fight against hate speech. Let's include people with developmental disabilities fully into our society. Most of all, let's always think of people with Down syndrome as people, first, not syndromes. Then the cruel words employed by clownish bigots will vanish into historical memory.
Posted by DSD at 11:44 AM