Actors with Down syndrome in more films, TV; 'Glee' star Lauren Potter says 'we're just like anybody else' 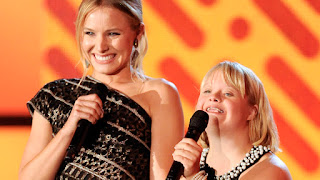 by Hollie McKay from Fox News:
Hollywood is looking for more actors with Down syndrome to play pivotal roles featuring characters with the developmental disability, and actors and industry experts alike say the increase in their visibility is making a big difference both on screen and off.
At least two films being released over the next few weeks feature characters with Down syndrome in pivotal roles. Vanessa Paradis’ “Café de Flore” explores the unrequited love between a mother and her young son with Down Syndrome in the socially stigmatized 1960’s Paris, while Alan Cummings’s “Any Day Now” is inspired by the true story of a gay couple who took in a teenage boy with Down Syndrome abandoned by his drug-addicted mother.
On the small screen there’s “Glee,” which features Lauren Potter, an actress with Down syndrome; Luke Zimmerman, who stars in “The Secret Life of an American Teenager”; and Jamie Brewer who plays a key role in “American Horror Story.” Hit shows “Saving Grace,” “CSI,” “Life Goes On” and “Nip/Tuck” have also recently featured characters with the disability.
“We love to see all the actors with Down syndrome in the spotlight, so everyone can witness how people with Down syndrome succeed with support and are able to pursue their dream,” Julie Cevallos, rep for the National Down Syndrome Society, told FOX411’s Pop Tarts column. “We haven’t seen this since the break out of Chris Burke, our NDSS Goodwill Ambassador, who was the star of ‘Life Goes On’ in 1989. It helps reduce the outdated stereotypes by showing beautiful, talented, communicative actors.”

Therapist Dr. Nancy Irwin concurs that the recent boom in roles for those with Down syndrome help audiences understand the disability, and shows Hollywood is trying to more accurately reflect “real” society.
“Entertainment should reflect all of us,” Irwin said. “Not just the ‘perfect’ people.”
For Lauren Potter, who has been on the FOX hit “Glee” for four seasons, her role represents more than just an acting job.
“It feels amazing to be a role model for people with and without disabilities. I get mail from people all over the world now from people who tell me that they didn’t really understand Down syndrome, but because of me they have read about it and studied it and now they know a lot more about it,” she said. “Lots of people with little kids or babies with Down syndrome tell me they aren’t afraid of the future for their child because of what I am doing to help people understand it better.”
Potter acknowledges that opportunities for actors with the disability have grown, but says Hollywood still has a long way to go.
“(It has shifted) but not enough! I love working on ‘Glee,’ and I hope that there are more and more parts for me and other actors with Down syndrome in television and in movies so I can keep working for a long, long time,” she said. “Actors with Down syndrome are just like any other actor, they want to follow their dream to act and have great roles; not just roles that are written for people with Down syndrome, but parts that are written for any man or woman. Parts that can be played by a good actor that just happens to also have Down syndrome.”
That’s where Gail Williamson comes in. For the past two decades as the founder of the non-profit Down syndrome in Arts & Media organization, she has been actively working with studios and agencies to cast actors with Down syndrome and other developmental disabilities. Some of the shows she has assisted with include “Glee,” “American Horror Story,” “CSI,” “ER, and “Scrubs.”

Williamson says babies born with Down syndrome are perhaps some of the youngest humans ever taught acting. “These children suddenly find themselves meeting a host of new adults (therapists) who will ‘direct’ them in reaching the milestones of babyhood,” she explained. “It’s happening, and there are more people with disabilities like Down syndrome in television and in films today.”
The increased presence of actors with Down syndrome also has a powerful impact on those who work with them. French actress Vanessa Paradis told us that her “Café de Flore” role gave her a deeper appreciation and understanding of those with developmental disabilities.
“He was so smart and charismatic, we had such a strong connection and there was so much intensity, generosity and grace,” she said of Marin Gerrier, the young actor with Down syndrome who played her son. “There is something so pure in the way he interacted with others. He is such a beautiful little boy, really quick and sharp.”
Adam Moore, SAG-AFTRA National Director of Equal Employment Opportunities & Diversity, also praised the recent changes in the industry.
"Seeing someone with a disability onscreen has an unparalleled impact on the way in which audiences engage with issues of disability in every part of their off-screen lives," he said. "For so long now, the lives and experiences depicted in entertainment have been a poor reflection of the actual world in which we live, but I believe that producers and audiences alike are now demanding more truthful representations that include people with disabilities."
Potter agrees.
“People see that even though I have Down syndrome, I am just like anybody else,” she said. “People used to look away because they thought I was different than they; but now people come right up to me and talk to me, they aren’t afraid of the differences. People can watch me and say, ‘wow, she is just like any typical girl.’”
Posted by DSD at 12:00 PM