Actor with Down syndrome encourages teens to reach for their dreams 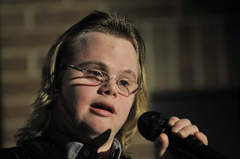 By Linda Girardi For The Beacon-News:
Although Peter ten Brink is a successful actor, starring in several favorite roles, it is his inspirational life’s story that wins over his audiences.

“It would be great if everyone could reach for their goals, use their imagination and love themselves for who they are,” the actor said.
The 20-year-old ten Brink has Down syndrome. And when he isn’t working in theater productions or memorizing his lines for the big screen, he is an advocate for those with special needs.
On Sunday, he met with a group of teenagers from GiGi’s Playhouse Fox Valley, a Down syndrome awareness and educational center that provides specialized teaching and support for individuals and their families. Sunday’s program was at the Comedy Shrine at Westfield Fox Valley mall in Aurora, a couple doors down from GiGi’s Playhouse Fox Valley.
People with special disabilities “can get ahead just like any other person,” ten Brink told his audience, and he graciously shared credit for his success — with his parents, Frank ten Brink and Jeannine Cleary of Glencoe, who accompany him on the sets, and with his acting coach, Sarah Rose Graber.
“I sincerely love my family – they are the best,” he said.
He said his mother often reminds him to eat healthy. “Naturally I don’t – I love french fries,” he said, drawing laughter.
When a teen asked how old he was and said he was “cute,” ten Brink replied to his fan by saying, “Ditto.”
“When Peter was born schools were just starting to include students with special needs in the regular classroom,” Jeanine Cleary said. “This new generation coming up is completely comfortable and accepting of people with disabilities.”
His parents acknowledged the days on movie sets are long, but their son is passionate about acting and he has remarkable ability for memorizing his lines.
He began acting with the Special Gifts Theatre in Northbrook and performed in productions for his school, New Trier High School. He realized his goal last year after he successfully auditioned for the leading role in the Hallmark movie “A Smile as Big as the Moon,” which is based on a true story about a group of students with special needs who overcome obstacles to attend Space Camp in Huntsville, Ala.
On the big screen, ten Brink played a high school student with Down syndrome. His teacher was played by John Corbett of “Sex and the City” and “My Big Fat Greek Wedding.” The movie aired earlier this year on ABC-TV.
On the improv stage of the Comedy Shrine, ten Brink sat beside his acting coach Graber, who directs a theater program for adults with special needs.

Graber said she was impressed with ten Brink’s willingness to work hard, be imaginative and creative.
“It wasn’t just about learning to play this game, but it was how to play this right and get better at it. Peter definitely is very passionate about learning,” the acting coach said.
After meeting with the actor, the GiGi’s Playhouse teens watched a video of the movie with their parents and siblings, as well as about a dozen teen volunteers from GiGi’s Playhouse.
“We wanted to give the kids some inspiration,” said program leader Marissa Quiles Yelenosky.
“The movie gives me hope for my 5-year old daughter, Samantha. Whatever their dreams, there is something out there for all of our children,” Yelenosky said.
Posted by DSD at 6:00 AM