Zoe Perryman, opens up on TV about her quest for love 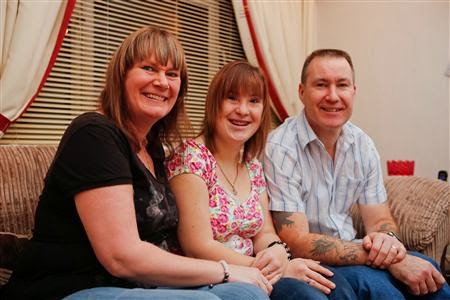 By Anna Young from Kent Online:
A young woman proved all you need is love when she found happiness on a TV dating show for people with disabilities.
Self-confessed hopeless romantic Zoe Perryman, from Maidstone, has Down’s syndrome. She has two engagements under her belt but her failed relationships only make her more determined to find ‘the one’.
More than a million viewers tuned in to Channel 4 last Thursday to watch the 24-year-old take a chance on The Undateables.

The series follows a group of hopefuls with learning or physical difficulties on their quest for romance.
Zoe was set-up with 32-year-old Nsimba Lupepe, from Ashford.
The pair’s first date was at Chessington World of Adventures in Surrey and their second meeting was at Embankments, formerly the Barge, which floats on the River Medway in Maidstone. And five months after the episodes were filmed in September, the couple are still together. Zoe said: “It’s going really well. I go to see him and he comes to see me. I’ve met his family and he’s met my parents and some of my friends. He’s really nice. We’re very happy and just seeing how things go.”
The former Bower Grove School pupil works at Tiny Town indoor children’s play area in Sheldon Way, Larkfield, and volunteers at Age UK Maidstone.
Zoe, who lives with parents Diane and Glen, both 48, and brother Darryl, 21, has mosaic Down’s syndrome, which only affects about 2% of people with the condition. People with this rare form may experience less delays with their development. She was at a club night for people with disabilities when producers invited her to take part in the programme.
Mum Diane said: “I was a bit worried at first but Zoe is so independent.
“She takes herself on the bus to work and to see Nsimba. She loves going out but always complains the night finishes at 9pm when she’s only just getting going.
Zoe said: “I loved being on the show. All of my friends were really excited to see me on TV. It’s the best thing I’ve ever done.”
The Undateables airs on Thursday at 9pm.
Posted by DSD at 6:00 AM