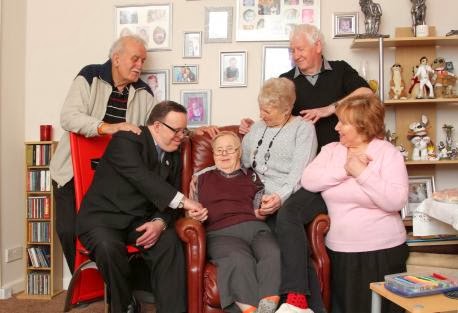 by Alexa Copeland from The Northern Echo:
THE country’s first parish councillor with Down’s syndrome made a four-hour round trip to meet a North East man thought to be one of the oldest with the condition.
Stephen Green, 48, was elected as a councillor on Nuthall Parish Council in Nottingham in 2012, making him the first and only serving British councillor with Down’s syndrome.
When Stephen’s father Grenville read a Northern Echo article online about the 70th birthday of Down’s syndrome man Micky Neal from Darlington, he set about arranging a meeting between the pair.
Mr Green said: “When I read about Micky, I just thought ‘I have to meet this family’.
“It is just amazing that Micky is the same age as myself, and at that time things were so much more difficult for people with Down’s syndrome.
“They were expected to be put into institutions and it is amazing that this lovely family worked together to give Micky such a happy and loving life.”
Mr Green said that although attitudes have changed, his son has experienced some negativity from councillors who do not think he is up to the job.
He said that Stephen makes his feelings clear by giving a ‘thumbs down’ to those councillors who say things at meetings that he does not agree with.
Mr Green added: “In his role as parish councillor Stephen is breaking down barriers.
“When he goes into schools to award prizes you can see the difference in the children after they have met him.
“They understand more about Down’s and they are rushing forward to meet him and wave him goodbye, and that is a positive thing.”
Mr Green is now working on a presentation about Down’s syndrome to help schoolchildren learn more about the condition and he hopes Mr Neal will be a part of it.
Rosetta Forster, Mr Neal’s sister, said she was “very surprised” when Mr Green first contacted them to arrange a meeting but said it was lovely they had made the trip up.
She added: “He said that he thought our family was amazing, which is very nice of him, but we just think that with Micky we are doing what any normal family would do.”
Posted by DSD at 6:00 AM