Rival teams come together for player with Down syndrome 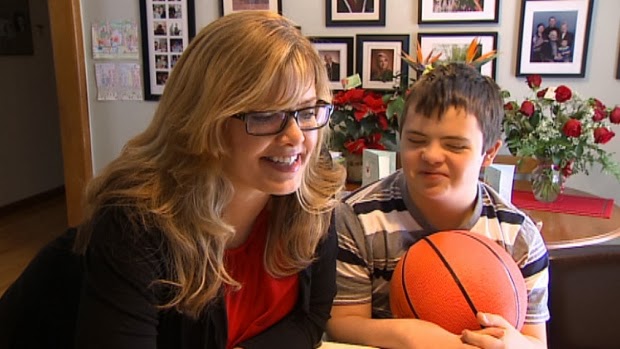 from CBC News:
Cross-town school rivals in Charlottetown came together last week to give Cameron Gordon, who has Down syndrome, his first shot at basketball glory.


Gordon is a student at Birchwood Intermediate School, and decided this year he wanted to try out for basketball. His mother, Catherine MacInnis, had her doubts about whether he would make the team.


"It certainly has been challenging," said MacInnis.


"There are things he's wanted to do that he hasn't been able to do."


Gordon's disability makes it difficult for him to compete on skill, but when it comes to spirit, he brings something to the gym everyone on the team wanted.


"He brought the boys up," said coach John Reid.

Jordan Reid says everyone came together for Gordon's first score in basketball. (CBC)

"Every time he's around the boys, they're smiling."

And in that way, Gordon earned his spot on the team.

"If you ever have your head down, he comes over, he gives you a pat on the back, says it's OK," said team co-captain Jordan Reid.

Last Thursday, in a game against cross-town rival Queen Charlotte, the players and coaches decided it was time to give Gordon, who had so often lifted his teammates, a lift of his own.

"I was watching him on the bench, and I was thinking he probably wouldn't play. And then he stood up and went on the floor," recalls McInnis.

Jordan Reid said when Gordon stepped on to the floor, players from both teams moved out of the way.

"Cameron got right next to the basket, and I passed him the ball," said Reid.

The rivalry between Queen Charlotte and Birchwood goes back many years, but MacInnis said that last Thursday, the players, coaches and fans were united.

"We lost the game, but in five years, we're not going to remember that," said John Reid.

"But we're going to remember Cameron's first basket. It's something nice to be a part of."

Equally memorable for MacInnis was greeting her son as he came out of the dressing room.

P.E.I.'s new hoops star has scored a couple more times since then. But he said that first basket is the one he could re-watch again and again.
Posted by DSD at 6:00 AM