Dunlope grows from love of sport 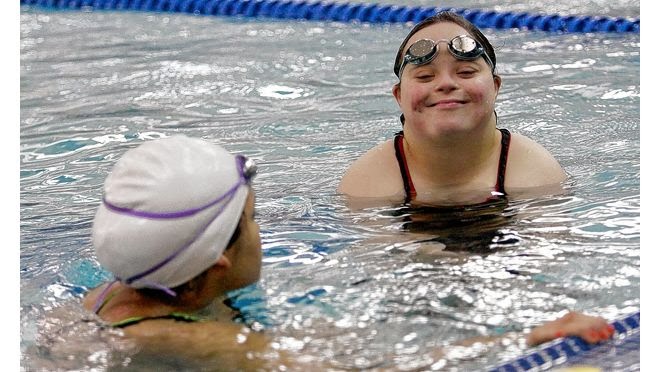 by Frank DiRenna from This Week Sports.com:
Anna Dunlope has been a part of the Westerville South High School swimming and diving program for four seasons.
Although she may not have had the same results as some of her teammates, her enthusiasm is endless.
Dunlope, 19, has Down syndrome, but she has not allowed it to hinder her love for the sport.
"We're very proud of her," said her mother, Debbie. "She loves swimming. It's been a tremendous positive influence in her life. The friendships that she has developed and the support system that she has with the other swimmers -- and just the camaraderie going to swim meets and seeing kids from other schools that she knows -- being part of a team is huge."
Anna's favorite event is the 100-yard breaststroke, but she also competes in other events, including the 50 freestyle. Her father, Doug, believes she has a personal-best of about 54 seconds in the 50 free.
She credits her teammates and coaches for helping her progress and enjoy competing in the sport.
"They keep me on track of what we're doing," she said. "Coach (Jeff Riegler) teaches me to go faster."
Anna is the only senior on the girls team, and Riegler expects her to receive special recognition during the Wildcats' season-ending awards ceremony.
'That makes me feel special," she said of being the only senior. "This is my last year. It's kind of sad."
"She can't do everything, but she doesn't really stop," Riegler said. "Everybody treats her with respect and you can't ask for a better teammate."
The Wildcats participated in a training program at Bowling Green State University during winter break, and Riegler said Anna benefited from the session.
Anna's twin brother, Jack, also swam four seasons at South and is a freshman at the University of Cincinnati.
"Jack is a year ahead of her in school," Debbie said. "With the friends that he has, they were very welcoming, very supportive and accepting of Anna. It's been just a wonderful experience. He's a brother and he wants what's best for her and to make sure that she is able to perform her best, and she likes to perform her best."
After graduating from high school, Anna plans to participate in the Best of Both Worlds Program, which is based at Otterbein University and has partnered with the Westerville school district.
The program helps students with disabilities work on job training and life skills while also offering the social aspects of a college atmosphere.
Dunlope also has participated in Special Olympics and Buddy Up Tennis, which focuses on adaptive tennis and fitness for children and adults with Down syndrome.
"It's a really cool program," Debbie said of the tennis program. "It works with people who have Down syndrome and they are paired up with individuals who help them on the tennis court. There are pros who are on the court and they work on things to strengthen particular weak areas in our athletes as well as learning the game of tennis."
Anna began swimming at a young age for the Annehurst Piranhas, a summer club based in Westerville.
She attended McVay Elementary School in Westerville with Emily Jeffries, and the two have remained close friends. Jeffries is a senior swimmer for Westerville North who also plans to attend Otterbein.
"I've been friends with Anna since about fourth grade," said Jeffries, who previously was a coach for Special Olympics. "She's is the happiest person I've ever met. She's so sweet. She's so down to earth. I love spending time with her. She brings me a lot of joy and I love that we get to swim together this year."

Members of the North and South teams competed Jan. 11 in the Northeast Classic at Branin Natatorium in Canton.
The North boys tied Mount Vernon for 16th (41 points) behind champion Strongsville (216) as 39 teams scored. Mason Miller won the 100 butterfly (51.41) and was third in the 100 free (47.1).
The South boys tied Canton GlenOak for 23rd (27). Calvin Higdon was fourth in the 100 fly (52.44).
The North and South girls teams did not score. Granville was first (186) as 38 teams scored.
"It's hard to believe the season is almost done, but it's going very well," said Riegler, who coaches North and South. "We had a really good time on the training trip. The kids worked really hard and bonded."

The Central boys team defeated Hilliard Davidson 111-67 and Hilliard Bradley 136-23 and lost to Hilliard Darby 92-88 in a quad meet Jan. 10 at Westerville Community Center.
Winners included Jon Brooks in the 100 fly (55.36) and Gabe Whitaker in the 50 free (22.57).
The Central girls defeated Davidson 105-80, Darby 102-81 and Bradley 137-39.
Alex Schuttinger won the 50 free (25.69) and 100 backstroke (1:02.54). Elaine Gray was first in diving (173.6 points) and Maddy Kramer won the 500 free (5:35.46).
"We have four fast kids on relays on the both the girls and the boys side," coach Austin Staab said. "We have a few kids that are going to make the state meet in the individual events and not just relays. We have a pretty good team stacking up and it's going to be pretty exciting to see what they can do at the sectional, district and state meets."
Central next competes in the OCC-Cardinal Division diving meet Jan. 24 at New Albany and the league swimming meet Jan. 25 at Thomas Worthington.
Posted by DSD at 6:00 AM