Jim Dial, who served as judicial center mail clerk for 11 years, died Friday morning at the age of 50 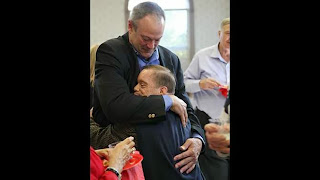 from the Covington News:
Beloved local Jim Dial, who served as judicial center mail clerk for 11 years, died Friday morning at the age of 50.
Dial, who had down syndrome, was known for his sunny personality and loving attitude. He inspired the same attitudes in others.
“For me, Jim was just an inspiration as to how we all should live life to its fullest, and with his challenges he did that. He was an inspiration on how we should all look at life, with or without challenges,” said Superior Court Judge Horace Johnson.
Dial was first appointed to deliver mail to the courts by former county chairman Davis Morgan; fellow employees often praised Dial’s dedication.
“Jim just came in and stole everyone's heart,’’ said Superior Court Clerk Linda Hays at a reception for Dial in 2009. "We look out for him - from the bottom of the building to the top. And I think that having him here has given us all an insight into down syndrome. We have all learned how intelligent he is and what a sense of humor he has. He has a heart bigger than the whole state, and he takes him job very seriously.’’
He retired in 2010, leaving a hole in his co-workers lives that’s sure to grow with his passing.
“We already missed him, but we still looked forward to seeing him around. We really will miss him, and our hearts go out to (his family),” Superior Court Judge Samuel Ozburn said.
“We’re all heartbroken about what happened. Jim was a very special person and meant a lot not to just me, but everybody at the judicial center. He brought something special every day that he came by our offices. I just think the world of Jim and his mother Shirley and all his family,” he said. “He was a blessing, and we were blessed to have him as long as we did.”
Dial was a huge University of Georgia football fan, and his mail cart had two UGA license plates on the front. Friends took him to Athens many times for football games and other events. Though the UGA cheerleaders couldn’t make it to his retirement party in 2010, former UGA football star David Pollack called to congratulate Dial.
At the retirement gathering, his mother, Shirley Dial, said working at the judicial center made a world of difference for Dial.
"It was his life; it fulfilled it," she said.
However, his co-workers and friends always agreed Dial gave much more to them than they could ever give to him.
"He taught us the most important thing in life is to love unconditionally," Hays said in 2010. "That’s what he did."
Dial was a member of First Baptist Church of Covington and was the first special education student to graduate from Newton County High School, according to his obituary.
The family will receive friends from 4 p.m. to 7 p.m. Saturday at Caldwell & Cowan Funeral Home, 1215 Access Road, Covington.
A memorial service for Dial will be held at 3 p.m. Sunday at Covinton First Baptist Church with the Rev. Len Strozier and the Rev. Jack Wilson officiating. Flowers will be accepted or donations may be made to the First Baptist Church Sanctuary Renovation Fund, 1139 Usher St. NE, Covington, GA, 30014.
Reporter Gabriel Khouli and Webmaster Amber Pittman contributed to this story.
Posted by DSD at 4:42 PM