‘Downistie,’ the Dutch soap opera starring only people with Down syndrome 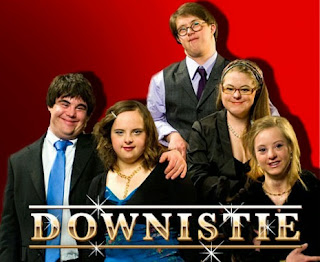 from Dangerous Minds:
A couple of years ago, a Dutch talk show on the Nederland 3 channel called De Wereld Draait Door (“The World Keeps Turning”; can also mean “The World Is Going Crazy”) tried an experiment, broadcasting for 12 weeks a soap opera in which all of the characters—and actors—have Down syndrome. The show is called Downistie (punning on Dynasty; this may be obvious but I didn’t really get it); each episode lasts three minutes.
The show has been both popular and controversial, according to reports. De Wereld Draait Door has been described on Wikipedia as a talk show with “news, information, television bloopers and general entertainment,” plus “every day there’s a live performance of a band in the studio.” It sounds a little like The Daily Show. So perhaps, even if Downistie is meant “seriously,” it’s a little as if it appeared at the end of, say, Conan. Boosters have touted the fact that the viewership is as high as a million people per episode—no mean feat in a country of 16 million people—but it’s unclear how many of those people were already watching De Wereld Draait Door anyway.
According to the Greetings from Holland blog, the actress who plays housewife and mom “Vicky” is named Sara van Ketel. She says (translation cleaned up a little):

I didn’t have to do auditions, I simply can act. I just want to be famous. I have always wanted it. I am already, a bit. In the supermarket or in the subway, people ask me, “Were you on TV?” And then I answer, “It is possible” ...  I think it is great that I act only with other people with a handicap. They are all my friends. Maybe other people think this is a crazy project, but I think it is quite normal. And we cannot do anything to change the fact that we have the Down Syndrome, right? I have suffered from bullies, mostly kids, who scream on the street: “mongoloid!” But I do not scream anything back. ... I do not kiss during the footage. I think it is not appropriate. I only kiss my real boyfriend in my real life. I have already watched some scenes on the television. I am enormously proud of myself.

The idea of a show with only people with Down syndrome is rather charming. What ends up being a true mind-bender is that it posits a world in which everyone has Down syndrome—all doctors, everyone at the gym, and so on. In this world, it’s the norm. Insofar as people without Down syndrome find the show humorous, part of the mirth may arise out of the depiction of such conniving, venal, and spiteful activities in people who are not generally depicted as partaking in such emotions. The show is nothing if not self-conscious—in the subtitled clip, the prognosis of an expected baby who may not have Down syndrome is treated as a crisis. Now that’s radical.

Here’s a trailer, jammed with drama: