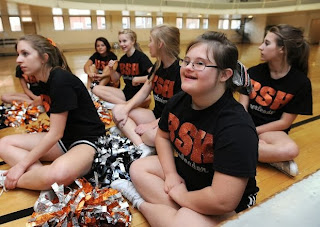 by Rob Rogers from The Billings Gazette:
The tryouts were closed to everyone, parents included.
“She had done dance forever and so we thought she’d do dance,” said Kristy Schnetter. “But she didn’t want to do that. She wanted to be a cheerleader.”
Aspyn Schnetter, 15 and a freshman at Senior High this year, finished at Lewis and Clark Middle School in May and decided she was going to try out for the high school’s cheer squad.
For Kristy, it was a little concerning. But not necessarily surprising. It was just one more example of her daughter’s indomitable enthusiasm and life-loving drive. Aspyn has Down syndrome.
And so Kristy knew the experience would be fraught with peril. She wanted to be in that tryout for no other reason than to at least show support for her daughter.
“I was really nervous,” Kristy said.
Baylee Larson, who coaches the team’s JV squad, was in the tryouts and remembers well when Aspyn came in.

“She went through the whole tryout process,” she said. “All the girls loved her. She brought something extra to those two days of tryouts.”
The squad was limited on the number of students they could bring on, but the whole team knew they had to find a place for Aspyn.
“She blew me away,” said head coach Vicki Criswell.
Aspyn had worked hard all summer, learned the cheers and routines and was totally confident in her ability to cheer with the team.
She made the cut and the team brought her on as the squad’s spirit director. She works out with the team and cheers at all the home games.
“She brings the whole meaning of the word ‘spirit’ to the team,” Kristy Schnetter said.
During the cheer routines, she’s often standing next to freshman cheerleader Aleksandra Famighetti.
“I love having her cheer next to me ‘cause she always smiles at me,” Famighetti said. “And if you’re having a bad day, she gives you the biggest hug and it just melts your heart.”
“She keeps us in check,” said freshman Sidney Bennett.
“She really helps our squad out,” said junior Jayci Jaurez.
The family has had fun with it, too. They go out to the games and watch Aspyn cheer, Kristy Schnetter said. Aspyn has three younger brothers who all give her encouragement. The youngest, who is 2, does a lot of the moves with Aspyn at home.
For Aspyn, the experience has been exactly what she wanted it to be. Rather than getting nervous or scared about cheering in the middle of games, she relishes the experience and loves being on the floor with “my friends.”
She loves hanging out with the girls, she said.
“They love her,” Larson said. “It’s a really good experience for them.”
All the girls talk about how upbeat and positive Aspyn is and how everyone in the school knows her as she walks down the hallway.
“She’s a really positive influence,” said Kendal Sterkenburg, a senior.
And the cheerleaders themselves recognize — and enjoy — how unique it is to have Aspyn on the squad.
“It’s beautiful that this can happen,” said Katelyn Gaffri, a senior. “It shows what kind of community this is.”