Samantha Stevens takes to the runway 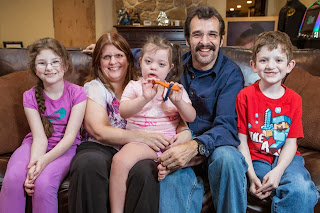 by Steph Hiltz from The Boston Globe:
When Michelle Sie Whitten established the Global Down Syndrome Foundation five years ago, her mission was to give a face to those within the community. And there’s hardly a more glamorous way to move into the spotlight than to don beautiful clothes and take to the catwalk. Of course, including a bevy of famous friends doesn’t hurt either.
“As a philanthropist, I go to a lot of charity events and [notice that] the people that are being served are often invisible,” Whitten said. She went on to create what has become the largest fund-raiser for Down syndrome in the nation, the annual Be Beautiful Be Yourself Fashion Show.
Since its inception in 2009, the event has raised more than $3 million for Down syndrome research, medical care, and education. Last Saturday, the show was held in Denver to celebrate it’s fifth anniversary.The models are of all ages, from various parts of the world, living with Down syndrome.
Posted by DSD at 6:00 AM

Email ThisBlogThis!Share to TwitterShare to FacebookShare to Pinterest
Labels: advocacy, Be Beautiful Be Yourself, fashion show, Global Down Syndrome Foundation, model, Samantha Stevens