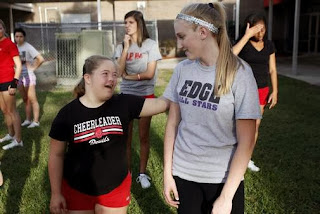 by Pavalli Agarwal from Highlands Today:
AVON PARK - In many ways, Mackenzie Riffle is a regular, bubbly 16-year-old high school girl.
She can talk incessantly about boys, likes to laze around in front of the TV, especially when Nick Teen's "H2O" and Fox Network's "Glee" show is on, and loves to cheer for the Avon Park High School varsity cheerleading team.
But in other respects, she's a little different and, perhaps, a lot more special to her cheer captain and longtime friend Caylie Wall and the school's varsity cheer coach Tammy Williams.
Mackenzie, who has been going to dance classes since she was a child and can do killer splits, has Down Syndrome.
She's the only special needs cheerleader Avon Park High has had since Williams has been coaching and will be cheering for all the home games this year because her parents thought she might get too tired at the out-of-town games.

"It's been good," Mackenzie, a freshman, said of the two football games she's cheered and the twice-a-week practice sessions. "I like cheerleading."
Caylie, whose mother has been teaching Mackenzie dance at CenterStage Dance Studio in Avon Park, came up with the idea after chatting with Mackenzie's sister.
She broached Williams with the idea. The 16-year-old had been cheering for the Sebring Middle School team and had liked it.
Williams was receptive and Mackenzie was selected at the tryouts.
"She's just one of us," Williams said. "She's very involved."
Mackenzie admitted being a little nervous at the first two games, and to make sure she's in step, watches Caylie's moves if she needs to.
It's also been a little tiring, but she's learned many new routines - and especially loves doing pep rallies.
"She's a natural," Caylie said with a smile and does great splits.
"Better than you," Mackenzie grins and both the girls start smiling. Caylie doesn't disagree.
An impish girl who loves to banter around and invariably leaves people laughing, Mackenzie has done more for the team than she realizes, Williams said.
When things get stressed out, trust Mackenzie to break the tension, she said.
"It has been a special bond," she said. "It has helped the girls. We all look out for her. She makes us laugh."
- See more at: http://highlandstoday.com/hi/local-news/avon-park-cheerleader-brings-special-touch-to-team-20131005/#sthash.O1ZYtmt2.dpuf
Posted by DSD at 6:00 AM