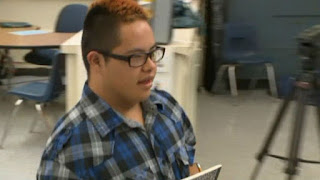 from KPLC TV:
At a San Diego high school, students are awarding homecoming king honors to a student with Down syndrome.
Although Ivan Mendoza has Down syndrome, that doesn't stop him from being one of the most popular kids on campus and putting a smile on everyone's face. Those qualities are part of the reason his classmates are awarding him homecoming king honors.
"He's so sweet," said a classmate who voted for him. "Even if he doesn't know you, he says hi. He's always talking to people. He's just really nice."
Another classmate said Ivan has one of the most appealing personalities on campus.
"When I see Ivan on campus, he's always outgoing, friendly, and nice," he said.
Once he heard about Ivan being on the homecoming king ballot, one of the school's football players dropped out of the race so that Ivan would be the only one in the running.
"I thought he should have the opportunity to win," said the football player. "So I just told myself I should drop out because I would like for him to win."
Ivan's mother said the gesture from classmates shows he is truly loved.
And it is that love that will make this year's homecoming that much more special.


MAKE WAY FOR KING IVAN
Well-liked Crawford High student ready for homecoming court after other boys bow out
by John Wilkens from U T San Diego:
How Ivan Mendoza wound up on the ballot for homecoming king at San Diego’s Crawford High School says something about his popularity on campus. Everybody knows Ivan, an 18-year-old senior with Down syndrome.
How he wound up on the ballot alone — an automatic winner — says something about his classmates.
One by one, the other boys who might have been king bowed out when they heard that Ivan had been nominated.
“I’d be happier to see him win than I would be winning myself,” said Kassey Marcus, a basketball player.
“I just felt like it would be right for him to win,” said Yoel Turcios, a wide receiver on the football team. “He’s outgoing. He’s friendly. He deserves it.”
So Friday afternoon, at halftime of the football game against University City, Ivan will get crowned. He’ll ride in a convertible. Saturday night, at the homecoming dance, he’ll wear a tux and dance with the queen.
“I think a lot of time the kids here get a bad reputation,” said Kelcie Butcher, a teacher at Crawford. “This shows people what they are really like. They have big hearts. They care about each other.”
Butcher is an adviser for the Associated Student Body, which organizes homecoming. She was surprised this year when the student nominations for king and queen came in. Usually there are about a half-dozen each, and like other schools, it’s often a list of the best athletes and the prettiest girls.
This year there were five girls and only one boy — Ivan.
The teachers were touched, but also a little worried. They wanted to make sure his nomination wasn’t a prank. At a school in St. Louis last month, students nominated a special-needs girl so they could make fun of her, according to news reports.
But Butcher and Alan Reitman, another Crawford teacher, said this one is genuine. Before they told Ivan, they checked with his mom to make sure the family was OK with it. They talked with students, including boys who would otherwise have been nominated. All said they’d stepped aside voluntarily when they learned that Ivan was in the running.
“This is such a diverse school,” Reitman said. “I just think part of their mentality is, ‘We’re underdogs, so we’re going to stand up for the other underdogs, too.’ ”

Crawford opened in 1958 in the El Cerrito neighborhood, between City Heights and Rolando. Among its notable alumni are San Diego Sheriff Bill Gore and singer-songwriter Stephen Bishop.
Once the school of the affluent from the College and Del Cerro areas, Crawford now educates the sons and daughters of mostly low-income families. There are about 1,200 students. It has a large immigrant population, with recent arrivals from Somalia, Ukraine, Vietnam and other places. Dozens of languages are spoken there.

Crawford also has a “Circle of Friends” program in which students partner with those who have learning disabilities. That increases everybody’s awareness about those who are different, said Brianne Hemmingson, a speech and language pathologist at the school.

Ivan is among two-dozen students with moderate to severe disabilities. His education is aimed at social and vocational skills. He learns how to count money and how to fill out job applications. A couple of days each week, he works at a Black Angus restaurant, rolling silverware into napkins.
Just 4 feet 5 inches tall, he still stands out on campus. Part of it is the bright-orange shock of dyed hair at the top of his head. Part of it is his friendliness.
“Everybody loves him,” said Evalene Guevara, a senior who is the ASB secretary. “He’s so sweet.”
She’s the one who came up with the idea to nominate Ivan for homecoming king. “I just knew he’d be excited about it.”
Sandy Nguyen, the student activities commissioner responsible for planning homecoming, thought it was a good idea, too. She wasn’t surprised other boys got out of the way when they heard about Ivan’s nomination.
“There’s this idea out there that Crawford is a bad school,” she said. “We’re really working hard to change that this year.”
Ask Ivan about homecoming and he smiles. He said he’s looking forward to the music and the dancing. His tux was donated by a local shop that heard what was happening at the school.
“What happens Friday at the football game?” Hemmingson, the speech pathologist, asked him.
“The King!” he shouted.
“And who’s the king?”
“Ivan!”
john.wilkens@utsandiego.com
Posted by DSD at 6:00 AM