Ann Coulter on using the "r-word": "I was not referring to someone with Down syndrome" 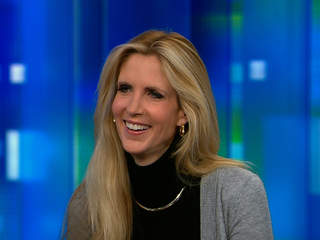 from Pier Morgan's Blog CNN.com:
On Friday, the always controversial Ann Coulter refused to apologize for calling President Barack Obama "the retard" on Twitter.
A determined Piers Morgan tried his best to pull an apology from the defiant Coulter who insisted she had nothing to apologize for since her remark was not directed at the community of mentally disabled individuals who were offended by the tweet. "I was not referring to someone with Down syndrome," said Coulter. "I was referring to the president of the United States."
"I didn't call the president a Down syndrome child," continued Coulter. "I used the word retard the same way people use idiot, cretin, moron and the rest of them which were all once technical terms and I had it with the language police."
Watch the clip and listen to the interview as Coulter explains why the "r-word" is not the same as the "n-word."

by Emanuella Grinberg, CNN - News Channel 5 WPTV NBC:
Conservative commentator Ann Coulter stood by her decision to call President Barack Obama the "r word" in a tweet, and questioned whether the word is indeed offensive.
"Maybe [Vice President Joe] Biden should be upset with me calling the president a retard but not an actually disabled person," she said Friday in an interview on CNN's "Piers Morgan Tonight."
Coulter was addressing a tweet she sent following the third presidential debate between Obama and GOP nominee Mitt Romney.
"I highly approve of Romney's decision to be kind and gentle to the retard," she posted to the social networking site.
She said in the interview she chose the word "because it's a synonym for 'loser.' " She professed to have used the word since.
Among the reaction to her post were a slew of critical tweets, as well as a blog post addressed to her by Special Olympic athlete John Franklin Stephens that went viral.

"Come on Ms. Coulter, you aren't dumb and you aren't shallow. So why are you continually using a word like the R-word as an insult?" he wrote in the post. "I'm a 30 year old man with Down syndrome who has struggled with the public's perception that an intellectual disability means that I am dumb and shallow. I am not either of those things, but I do process information more slowly than the rest of you. In fact it has taken me all day to figure out how to respond to your use of the R-word last night."
Stephens appeared separately on "Piers Morgan Tonight" Friday.
"The word retard is offensive, and that I should not be a symbol for someone who is dumb and shallow," he said. "If they wanted to use me as a symbol, use me as a symbol for someone who fights adversity."
Coulter said "language police" were dictating what words should and should not be used, and denied the term was offensive at all.
"It's offensive according to whom? Moron, idiot, cretin, imbecile, these were exactly like retard, once technical terms to describe people with mental disabilities," she said. "Changing the word doesn't change the definition. I was not referring to someone with Down syndrome. I was referring to the president of the United States."
In addition, those who are offended by the word have little ground, she suggested.
"No disabled people are saying it, the spokesmen for the disabled," she said.
Pressed on whether the word bore a stigma similar to another offensive word -- the n word -- she said, "I wouldn't use the n word because it's a curse word."
Read more: http://www.wptv.com/dpp/news/national/ann-coulter-piers-morgan-cnn-interview-video-coulter-stands-by-use-of-retard-comment#ixzz2AigtZQ58