Global Down Syndrome benefit is expanding 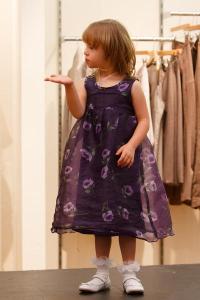 by Joanne Davidson from The Denver Post:
Let's take a good thing and make it even better seems to be the catchphrase for the 2012 Be Beautiful Be Yourself Fashion Show. The Oct. 13 benefit for the Global Down Syndrome Foundation has a new location, several great additions to the committee and a new element best described as "timely."


The goal, she added, is to raise $1.75 million. "I know that's aggressive," Sevo said, but thanks in large part to the efforts of corporate sponsor chair Shane Phillips, $900,000 is already in hand.
Sevo also reminded the 200 guests that the event is moving to the Sheraton Denver Downtown and that a new silent auction category has been added. "It's Time" will be a collection of vintage, designer and other new or lovingly cared-for watches and clocks. Have a donation? Call Martha Cronen, 303-468-6667.
The event is also welcoming support from Annabel Bowlen, wife of Denver Broncos owner Pat Bowlen, and several of the women who had volunteered with her on behalf of Beacon Youth and Family Center's Cherish the Children Guild. Beacon Center, which had provided mental health services for 42 years, closed in March 2011.
Bowlen is chairing Be Beautiful Be Yourself's live auction. Other former Beacon supporters with leadership roles include Kay Burke (silent auction); Debra McKenney (tickets); Judi Wolf (program and talent); Nicole Gampp (gift bags) and Judianne Atencio (public relations). Former guild members Marilyn Spinner, Lydell Peterson and Edna Chang-Grant also are on the committee and Quinn Washington is coordinating participation by young professionals.
Guests at the kickoff also enjoyed hors d'oeuvres from Catering by Design, informal modeling and a runway segment that had children with Down syndrome appearing in clothes from Little Me's and professional models showing fall styles by designers carried by Lawrence Covell: Brunello Cucinelli, Jean Paul Knott, Chris Benz and Caruso.

Sevo said that in keeping with tradition, there will be a fashion show at Be Beautiful Be Yourself. The stars will be children with Down syndrome escorted by professional athletes and the visiting celebrities. What's different is that unlike in the three previous years, there is no fashion sponsor for the adult models. They will be wearing their own clothes.

Read more: Davidson: Global Down Syndrome benefit is expanding - The Denver Post http://www.denverpost.com/lifestyles/ci_21429919/global-down-syndrome-benefit-is-expanding#ixzz259AxAx63
Posted by DSD at 6:00 AM