2 students with Down syndrome to be featured at art exhibition 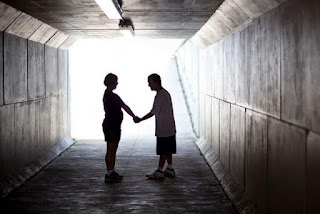 by David Berman from the Chillicothe Gazzette:
Alan Blue and Kaitlyn Brown are like any other teenage couple -- they bicker, they flirt and they make sure everyone knows they're dating. Well, Alan does.

What sets the Unioto students apart from other teenage couples, if only slightly, is the fact they both have Down syndrome.
It's not anything you'll hear them talk about -- Kaitlyn would rather discuss how much she loves to swim, dance and play soccer, and Alan would prefer to focus on his role as an assistant coach for the Sherman football team -- but it's the reason they're featured in a photo exhibition set to open Thursday at the Dublin Arts Council.
The arts council, working in conjunction with the Down Syndrome Association of Central Ohio, paired four photographers with 13 members of the Down syndrome community for "Shifting Perspectives: In the Community."
The exhibition is described by the Dublin Arts Council as "a celebration of acceptance, capturing the joy and wonder of what it is like to be human and living with Down syndrome." It's being curated by Richard Bailey, a British photographer who helped create the first "Shifting Perspectives" exhibition in the U.K. in 2005.
Bailey is traveling to Dublin Arts Council for the exhibition, pairing some of his recent images with those from Ohio.
Barb Schwartz, a freelance photographer from Columbus, photographed the couple this summer at Unioto High School and the Ross County Fair.
"I loved meeting Kaitlyn and Alan because they truly exhibit the qualities in people living with Down syndrome that I was hoping to find," Schwartz said. "Their obvious devotion to each other was charming and romantic, and they were fun, patient, and kind through two very long photo shoots. I wish I had more time to spend with them."
Asked about the experience, Blue said, "We love it. We want to see (the photos)."
"I do, too," Brown said.
Brown's mother, Tonya, said the couple was selected to be photographed primarily because they're a couple, "and the fact they're both so involved and the community has been so receptive to them." She said she hopes the photo exhibition will help break the stereotype that people with Down syndrome are not capable.
"I think 'Shifting Perspectives' is a great name for it because they have relationships, they're involved in activities and they're part of the community," she said.
Blue, 18, and Brown, 16, have been dating since he was in eighth grade and she was in seventh grade. Brown simply said they met in speech class, but to hear Blue tell it, the moment was incredibly romantic.
"I looked her in her eyes and asked, 'Will you be my girlfriend?' and she said, 'Yes.'"
Just like any other couple, Blue and Brown enjoy going on dates.
"We like to watch movies, go out to eat and talk," Brown said.
Today, the couple is taking part in the Down Syndrome Association of Central Ohio's Columbus Buddy Walk at Crew Stadium, where Blue said they'll be holding hands and drinking "10 gallons of Mountain Dew."
Posted by DSD at 6:00 AM