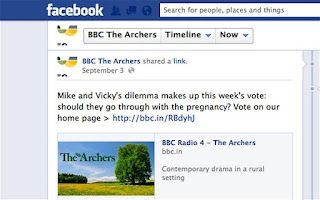 By Anita Singh from The Telegraph:
Fans of The Archers have protested at a “tasteless” BBC poll which asked them to vote on whether characters in the Radio 4 soap should abort their Down’s Syndrome baby.
The characters, Mike and Vicky Turner, recently learned from the results of an amniocentesis that their unborn baby has the syndrome.
The programme’s official Facebook page invited listeners to vote on what the couple should do next.
A message read: “Mike and Vicky’s dilemma makes up this week’s vote: should they go through with the pregnancy?”
Listeners complained that the BBC was treating a serious issue so lightly.
“Can’t help thinking this vote a little distasteful?” said one.

Another wrote beneath the vote message: “What a disgusting poll to run,” while others called it “disturbing and upsetting”, “crass”, “offensive” and “tasteless”.
One listener commented: “I was very surprised when I saw this poll. The storyline is hard, the considerations are complex and any decision will be fraught with doubts - not a scenario which can be answered by yes/no, by people who have never been there. Please remove this poll.”
Initially, the BBC defended the vote, writing on Facebook: “Sorry you feel this way. The polls tend to reflect the storylines that are most talked about in the programme, and this is Vicky and Mike’s dilemma. The result of the poll doesn’t affect the outcome of the storyline.”
However, it later bowed to calls for the vote to be removed from the website.
Writers for The Archers worked on the storyline in conjunction with the Down’s Syndrome Association, who described the vote as “unfortunate”.
A spokesman for the association said: “The scriptwriters wanted to get it right and they have been a joy to work with. They have been very thorough and the storyline shows the discussion that happen on a day-to-day basis as parents go through the screening process.”
A BBC spokesman said: "The Archers storyline on Mike and Vicky’s pregnancy has been well-received by the audience and raises a number of important issues about Down’s Syndrome, informed by the advice and expertise of the Down’s Syndrome Association.
"However this issue is too complex and sensitive for an online poll and we regret any offense the poll may have caused.”
Posted by DSD at 9:56 AM