Eggs and Lean Meats Prevent Emotional, Metabolic Disorders and Down Syndrome in Fetuses? 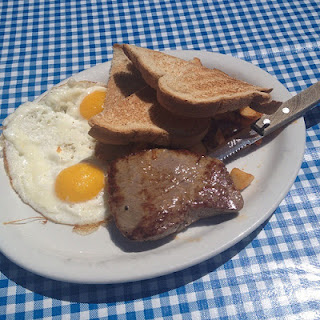 by S.C.Stringfellow from Counsel & Heal:
In a study that adds more confusion as to whether or not red meat and eggs are good for you, a study in the FASEB Journal claims that nutrients found in the above food stuffs may have genetic benefits for a fetus.
Nutrition scientists and obstetricians at Cornell University and the University of Rochester Medical Center found that higher-than-normal amounts of choline, found in eggs and meat, in the diet during pregnancy changed modifications in the DNA of a fetus that tells certain genes gained from the mother to switch on or off.
Namely, the genetic markers responsible for all our hormonal activity such as growth, our response to stress and metabolism speed, among other things.
The results were derived from an experiment which involved a study of 26 pregnant women in their third trimester who were assigned to take 480 mg of choline per day, an amount slightly above the standard recommendation of 450 mg per day, or about double that amount, 930 mg per day.
The findings indicated that fetus' of mothers were less likely to develop stress or metabolic disorders such as anxiety, depression, obesity, hypertension  and Down Syndrome, than those who took the 480 mg and even more protected than those who have less choline intake.
While more research is needed, Caudill says that her message to pregnant women would be to consume a diet that includes choline rich foods such as eggs, lean meat, beans and calciferous vegetables like broccoli.

"One day we might prescribe choline in the same way we prescribe folate [acids such as those found in orange juice] to all pregnant women," notes Pressman, the James R. Woods Professor in the Department of Obstetrics and Gynecology. "It is cheap and has virtually no side effects at the doses provided in this study. In the future, we could use choline to do even more good than we are doing right now."

Read more at http://www.counselheal.com/articles/2906/20120921/eggs-lean-meats-prevent-emotional-metabolic-disorders-down-syndrome.htm#zkGX03ciYb4dltS6.99
Posted by DSD at 6:00 AM