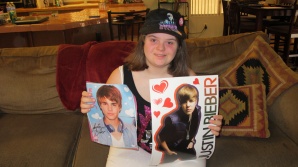 by Haley Frances from AZCentral.com:
Like millions of other kids, Samantha Basile idolizes teen singing sensation Justin Bieber.
With posters plastered on the walls of her bedroom in her family's Phoenix area home, and a big box of Bieber knickknacks including hats, T-shirts, and concert DVD's, it's clear Basile has "Bieber Fever."
But unlike most Bieber fans, the 16 year-old senior at Pinnacle High School also has Down syndrome. And each and every day when Samantha gets home from school she sings and dances along to her favorite Justin Bieber songs.
12 News staffers learned about a video that Samantha and her sister, 15 year-old Kasey Basile, posted on YouTube.
Kasey and her friends posted a 3 1/2-minute video hoping to catch the superstar's attention, and let him know that Samantha, who has never even been to a Justin Bieber concert, is a devoted fan.
"She said if she saw him she would pass out", Kasey explained.
The girls' mom, Linda Calleja, teared up while explaining how important this is to her daughter. Calleja says that Samantha is selfless, and never asks for anything unless it's something with a logo or picture of her favorite superstar.
In the video the girls created, Samantha holds up note cards for Bieber to read, and describes her two wishes, to be a normal teenager and to meet Justin Bieber.
Bieber's North American Tour rolls into Glendale's Jobing.com Arena on Saturday, Sept. 29. The family is hoping that Sam's second wish can come true.


Read more: http://www.azcentral.com/community/nephoenix/articles/20120816justin-bieber-fan-down-syndrome-phoenix.html#ixzz23oTH4dW1
Posted by Rick at 6:00 AM