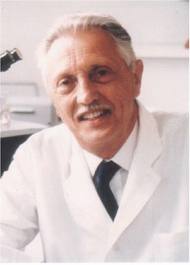 by Francis Phillips from the Catholic Herald:

The French geneticist’s Cause is needed more than ever
Another good news item from Rome Reports: at the current Rimini Conference of 2012 to discuss the economic crisis, education and inter-religious dialogue there is an exhibition to highlight the life and work of the late Professor Jerome Lejeune, 1926-1994, entitled “What is man that one is mindful of him?” It includes his writing desk, his microscope, his diaries and many photos. Professor Lejeune became world-famous in 1959 when, as a young Catholic doctor and scientist working in the field of genetics, he discovered the extra chromosome that causes Down’s syndrome or Trisomy 21, a common form of mental disability. His discovery opened up a whole new field of research and he was made the first professor of Fundamental Genetics at the Faculty of Medicine in Paris.
However, for Lejeune research was never an end in itself, though it brought him international recognition and, in 1969, the William Allen Memorial Award, the highest academic honour in genetics. According to Wiki, he was now “driven by a single ambition: to find a treatment that would bring relief to his patients as quickly as possible.” He viewed research “as inseparable from treatment and he was horrified as he gradually realised the consequences that misuse of his discovery would have for babies with Trisomy 21”, i.e. that it would be widely used to diagnose and then abort these disabled babies in the womb.
He wrote at the time, “That this rejection of medicine – of the whole biological brotherhood that binds the human family – should be the only practical application of our knowledge of Trisomy 21 is beyond heartbreaking.” According to his daughter Clara, who was to write her father’s biography, “Life is a Blessing” after his death from lung cancer on Easter Sunday 1994, he knew each of the 5000 patients in his clinic by their first name. His daughter said he decided he couldn’t accept abortion “not because he was a Christian but because he knew as a geneticist that life starts at conception.”
Lejeune became friends with another pro-life champion, the late Pope John Paul II who named him as the first president of the new Pontifical Academy for Life. He once told his daughter, without any bitterness, that his championship of life alongside academic research was to cost him the Nobel Prize. It also made him an outcast within the scientific community and his funding was withdrawn. He was not deterred. His daughter remembered that her father once came home to lunch and told the family about a little boy with Down’s syndrome who had seen a programme about pre-natal testing and who had begged him to save him from “those who want to kill us.” Clara Lejeune relates, “He was white and he said, “If I don’t protect them, I am nothing.” Professor Lejeune’s cause for sainthood is now being investigated.
Personally I hope his cause proceeds quickly. Never have we so needed the voices of doctors to defend life, whether those of disabled preborn babies, or now the elderly and sick. Lejeune knew that his mission as a doctor and geneticist was to save lives, not destroy them. When I read his biography I was deeply moved by its portrait of this humble man: a loving husband and father as well as a distinguished doctor. It actually inspired me (never having walked any distance in my life) to undertake a sponsored 25-mile walk in the millennium year 2000 for pro-life societies at university, which were then under attack from other “pro-choice” student groups. Never having done any fund-raising before, I managed to raise over £2000.
On a more personal note, when our youngest daughter was born with Down’s syndrome in 1990, I wrote for advice to Professor Lejeune at his research centre in Paris. He replied in longhand by return of post. I treasure his letter and the memory of this great and saintly man.

from the Jérôme Lejeune Foundation:﻿
In 1958, Professor Jérôme Lejeune, a doctor and researcher at the Necker Hospital in Paris, discovered an extra chromosome on the 21st pair and in so doing discovered the genetic cause of Down syndrome. As the father of modern genetics, he received may international awards for his work, including the Kennedy Prize and the Allen Memorial Award.
Trisomy 21 (Down Syndrome) is not a fatal condition, but a disability caused by a genetic error at conception and the most common single cause of birth defects in humans. Professor Lejeune was convinced that one day researchers would discover treatments that would largely restore the intellectual capabilities of individuals born with Down syndrome. The Jérôme Lejeune Foundation is committed to fulfilling Professor Lejeune’s dream, and in collaboration with researchers around the world conducts and funds research leading to targeted treatments to address issues related to cognition, memory, and speech, as well as the other comorbidities caused by the extra 21st chromosome.
Every year the Jérôme Lejeune Foundation provides funding to over 60 research teams who are pursuing treatments for genetic intellectual disabilities in the US, Canada, France, Israel, Italy, Lebanon, Spain, Switzerland, the UK, and other countries. The Foundation is the world’s oldest and largest funder of research to find treatments for Trisomy 21 and other genetic intellectual disabilities. Our grants are 100% funded by private donations.
The Foundation also supports clinical research through the the Institut Jérôme Lejeune, in Paris, such as the ACTHYF program which aims to establish a link between the use of folinic acid and thyroid hormone to improve the psychomotor development of toddlers with Down syndrome. The Institute offers lifelong, specialized medical care through a medical and paramedical team. The Institut Jérôme Lejeune treats over 3,600 patients annually from France and abroad.
All of the Jérôme Lejeune Foundation and its subsidiaries’ work has an ethical label which ensures the utmost respect for the value of each and every human life. The Foundation will only finance research that respects human life from conception to natural death. We do not support any projects that use products derived from human embryos or fetuses as research material.

from the Down Syndrome Radio Podcast:
Our guest on this episode of the podcast is Mark Bradford, President of the Jérôme Lejeune Foundation, USA.  I had the pleasure of meeting Mark at the kickoff event for the Race Across America.  He is the Down Right Awesome Dad of seven children.  We probably could have spent the entire hour discussing how one handles seven kids, but the work being done by the Lejeune Foundation is so interesting we’ll have to save that topic for another show.  Mark gives us some history of Dr. Lejeune and the foundation that bears his name.  We also discuss how the foundation strives to achieve the three fundamental points of its mission.
Download Down Syndrome Radio, Episode #9 or listen via iTunes
Posted by Rick at 6:00 AM