Wait nearly over for Ishpeming football senior Eric Dompierre, who has Down syndrome 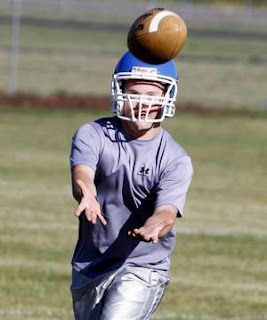 by Shawn Windsor from The Detriot Free Press:
The walk from Eric Dompierre's house to the Ishpeming High School football field is less than two minutes. Out the front door, north on Main, west on Empire, into the parking lot, through the chain-link fence, onto the green grass.
It's a walk Dompierre has made hundreds of times the last three years, a walk that has helped shape his identity as he made his way through high school. On Monday morning, Dompierre made that walk again, helmet in hand, breeze at his face. His father fought for more than two years so he could keep taking the walk, so he could have a chance to play football during his senior year.
Of all the stories that began Monday as high school teams from across the state held their first football practices, perhaps none was as unique as Dompierre's.
Dompierre, who has Down syndrome, turned 19 in January. That birthday put him at odds with the Michigan High School Athletic Association, the governing body for the state's high school athletic programs that dictates no student shall compete in any athletic competition if they turn 19 before Sept. 1.
At least until Dompierre's father, Dean Dompierre, managed to convince the MHSAA and its member schools to change its bylaws and allow students with certain disabilities to apply for a waiver if they were too old. Eric Dompierre and his father got the rule changed. They applied for a waiver earlier this summer. A ruling is due Wednesday.
"We are optimistic," said the elder Dompierre, a sixth-grade elementary science teacher who has become something of a celebrity in this mining community near the shores of Lake Superior.
The opening of football season is nearly always reason for optimism. That includes places like Detroit Cass Tech, where the Public School League team aims to follow its improbable state title run last season with another this season, and at Birmingham Brother Rice, where 79-year-old coach Al Fracassa wants to cap off a marvelous career with a consecutive title.
Ishpeming High has designs on Ford Field in November, too.
The Hematites -- the nickname is taken from the mineral form of iron oxide -- lost in the quarterfinals of the state playoffs last season. The year before that, Ishpeming lost in the state title game to Hudson, 28-26.
Jeff Olson, the team's head coach, said he thinks his team has a chance to be good again, on the strength of his senior class and a football culture based on the area's mining ethos.
Olson likes football because it is hard.
"It's not for everybody," he said. "We appreciate anybody who comes out and puts in the work."
Dompierre showed effort from his first two-a-day practice three years ago as a freshman. He kept showing it during the off-season at local weight-training facilities and in his Christmas demands to his father, when he asked for a Bowflex so that he could lift and stretch in their basement.
Dompierre, a 5-foot-2, 140-pound receiver, is the shortest and smallest player on the team. Perhaps this is why he lifts and stretches and runs, as he did Monday for most of the morning and afternoon, even after practice, when a friend who took him to the prom showed up for a run.
"He's earned his place," Olson said. "He's had to keep fighting."
Last season, Dompierre got onto the field for one pass play. Mostly, his role is with special teams, which is why he spent the last hour of the morning session attempting extra points on the main football field, adjacent to the practice fields where the rest of the team scrimmaged.
Over and over Dompierre tried to kick the football through the uprights, roughly 19 yards from where he'd placed it; each time the ball ricocheting off the crossbar or knuckleballing underneath it.
"Good kick," said his dad, who was on the field to help Eric practice kicking.
The son may not entirely grasp the amount of work the father put in the last two years to give him a chance to keep playing. But he understands enough to know that his father is the reason he has a chance to keep playing. Still at this moment, like any other varsity football player, he'd rather his father not be here.
Dompierre wants to do it alone. And later tells his dad: "You are too protective. You give me too many tips."
What he really wants, of course, is for his father to watch from behind the fence, or from the stands. The son will find out later this week whether the father will keep getting that chance when the MHSAA makes its ruling on the waiver.
In the meantime, Dompierre is allowed to practice. So he will make that walk. Down the street, to the left, back to the right and out into the vast openness of possibility.
Posted by Rick at 5:00 PM