will Sue Sylvester's baby have Down syndrome in "Glee" season 4? 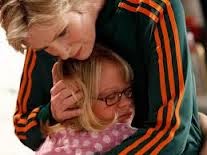 from Wetpaint by Beth Douglass and Ryan Gajewski:
Back in Glee Season 3, Episode 15: “Big Brother,” an abnormal test result gave Sue (Jane Lynch) the shocking news that her unborn baby might potentially have Down syndrome. Nothing could be certain, though, so we still held out hope that Sue might give birth to a happy and healthy little tot.
Sadly, it seems that just won’t come to be. Jane Lynch spoke with E! Online on August 5, she shared that though Sue will have “just given birth to a beautiful baby girl” when the show returns for Season 4 this fall, the tiny infant also “has Down syndrome.”
Given the care and sensitivity Sue has displayed when working both with Becky (Lauren Potter) and with her late sister, Jean, we have no doubt that the new mother will more than rise to the occasion. Plus, can you imagine a Sue-Becky-Baby trio — how adorable will that be?

from Glee Wiki:
Sue is currently pregnant as of On My Way. In Big Brother, she finds out that her child is female and has a high risk of having Down syndrome, similar to how her sister Jean and cheerio of hers, Becky, the two people closest to her, had Down syndrome. Her baby will be born by the time season four starts

also from Glee Wiki:
In Big Brother, Becky shows up in Sue's office door, hovering without saying anything. Sue tells her that she is, in fact, interrupting. Becky tells Sue that she heard about her baby. Sue had learned earlier in the episode that there were irregularities in the test results for the baby, so she clearly assumes that is what Becky is talking about. When Becky says that she heard the baby is a girl, Sue smiles and says, "Just like you," and hugs her, thoughtfully repeating the phrase, indicating that the baby likely has Down syndrome. Becky offers up a parenting tip for Sue to work on her patience.


from teen.com:
Sue gets good — and bad — news about her unborn baby. The good news? It’s a girl, like she wanted. The bad news? She finds out that there were some “irregularities in the amnio” and that her baby has Down Syndrome like Becky. Ok, it’s not unlikely that that would happen to a woman of her age that’s pregnant — but it is unlikely that she’s even preggers in the first place. From a “celebrity” sperm donor. Puleez.

from the Washington Post by Jen Chaney:
Before moving on to the musical numbers assessment, I should probably also note that Sue Sylvester found out that her unborn baby girl likely has Down syndrome, and that she’s also still feuding with Nene Leakes, who is now co-coach of the Cheerios.

from Remington Remer:
Anyways, the ironic part...Sue Sylvester the cheerleading coach (which you would have done too to be just like your favorite Aunite) found out she was pregnant with a girl that may have Down's Syndrome. That part in the show made me smile and the reason there were no tears is because to me you would have to be lucky to have a baby with Down's Syndrome just like you. Sue Sylvester hugged one of her cheerleaders, Becky because she also has Down's. Becky told Sue the only advice she had was for Sue to be "Patient!"

from E Online by Bret Malec and Liz Calvario:
Meanwhile, Lynch also dished on what's in store of Sue Sylvester and her new baby in season four of Glee.
"Momentarily I'm nice," she said. "I've just given birth to a beautiful baby girl who has Down syndrome and her name is Robin. Which to say hearkens thoughts of spring and new beginnings and her favorite Bee Gee."
Posted by Rick at 4:00 PM