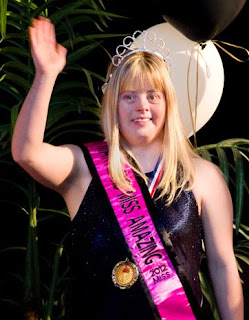 Sammie Gibbons strutted across the stage during the evening wear portion of the Maryland Miss Amazing Pageant, stopped at center stage, spun around, put her right hand on her hip while staring at the audience, then exited the stage to a round of applause.

Her mother and sister stood in the second to last row of the audience giggling while taking as many pictures as possible.

Sammie, 14, was participating in her first pageant, but she isn't your typical beauty contestant.

Sammie has Down syndrome and was one of 11 girls with disabilities participating in Maryland's first Miss Amazing Pageant on Saturday at the International Community Church in Frederick.

The mission of the pageant is to provide an opportunity for girls and young women with disabilities to build confidence and self-esteem in a supportive environment.

"They're not judged on what they can or can't do," said Sammie's mother, Jean Harley. "Everybody wins."

The pageant was organized by 16-year-old Gov. Thomas Johnson High School junior Kadija Bah, who heard about the pageant on Nickelodeon and contacted the organizers to bring a show to Maryland.

"It was amazing," Bah said after the nearly two-hour pageant. "All of these girls deserve trophies and sashes after tonight."

More than 80 people attended the pageant, which featured the girls introducing themselves, showcasing their evening wear and performing a talent such as dancing, playing an instrument or singing.

Bah said part of her inspiration came from baby-sitting her neighbor Gabriella Rodriguez, who has Down syndrome.

"She is just as special as everyone else," Bah said.

Rodriguez's mother, Dana Specht, said her daughter had been "so excited" in the weeks leading up to the pageant, especially trying on all the different dresses.

Although the pageant started at 5 p.m., the contestants arrived at the International Community Church at 9 a.m. to begin preparations. They had an opportunity to learn from current Miss Maryland, Miss Urbana and Miss Maryland Outstanding Teen pageant winners, and have their hair and makeup professionally done.

Contestants ranged from 7 years old to those in their 30s.

Bah said she was thankful for all the volunteer support, especially from the church, and she is hoping to make the pageant an annual event.

Standing onstage after being named first princess in her division, Brigitte King blew a kiss to her father, Rex, sitting in the second row. After the pageant, King said he was "incredibly proud" of his daughter for participating in her first pageant.

"It was something she was really looking forward to," he said.
Posted by Rick at 9:40 PM