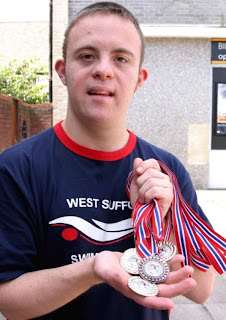 The mother of Haverhill-trained swimming sensation Tom Cole has branded the classification system that will see him unable to compete at the Paralympics next year as “discriminating” against Down’s Syndrome.

Double World gold medallist Cole, 22, will be denied the once-in-a-lifetime chance to line-up in the Games in his home country due to a system which puts people with Down’s Syndrome into competition with people without any physical disabilities.

Cole, who holds six European Down’s Syndrome swimming records, alongside his two World Downs Championship gold medals, will be left to watch the drama unfolding on television next summer wondering ‘what if’.

The current system used by the International Paralympic Committee (IPC) would only allow Cole to compete in an S14 category which covers learning disabilities with an IQ under 75.

But this does not take into account common Down’s Syndrome physical disabilities such as narrower windpipes and low muscle tone as well as restricted height.

Mrs Cole said: “We are gutted and every Down’s Syndrome swimmer in Great Britain feels the same.

“Physically there are things wrong as well as a low IQ and I cannot see how IQ would affect swimming.

“I do not know why the IPC do not recognise it when it is a disability you can diagnose before birth.”

Despite their family having launched a campaign for a change in the classification system and with MPs around the country having taken up the fight, nothing has worked with Mrs Cole claiming it is like hitting “a brick wall”.

Phil Ward, a West Suffolk Swimming coach who has worked with Cole, of Great Waldingfield, near Sudbury, at Haverhill Leisure Centre, labelled it “an uneven playing field”.

He said the fact Cole would come up against people much taller and healthier than himself, with far better muscle tone, meant he could not be capable of beating them in the pool.

A spokesman for the IPC said Down’s Syndrome athletes were a ‘very small group of people’ that it would not be realistic for them to cater for with their own classification.

He said classification had to be done by primary impairment, which, in the case of Down’s Syndrome, was deemed to be intellectual.

“We are driven by primary impairment and in the case of Downs it (physical) is a secondary impairment,” he said.
Posted by Rick at 8:00 AM