Grandfather to race across Sahara for Down syndrome 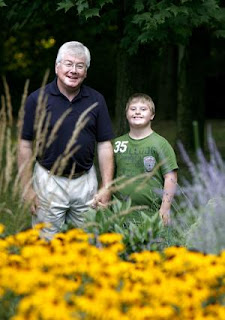 Richard Davies would go to the ends of the earth for his grandchildren.

And next April, he will.

The 57-year-old attorney will participate in the Marathon des Sables, or Marathon of the Sands, and in doing so, hopes to raise money and awareness for The Up Side of Downs, an organization for families affected by Down syndrome.

Davies, a native of Wales, has two grandchildren, one by each of his daughters, with the disorder.

He said when he tells people about the trip, most just ask, “Are you crazy?”

The Marathon des Sables is a 155-mile, seven-day race through the desert of Morocco.

Competitors run or power walk through some of the most remote sections of the Sahara while carrying a backpack with essential gear, food, sleeping bag and clothing for the week. Water (generally nine liters per day) is provided and rationed, along with a two-sided Berber tent each night for sleeping.

According to the official regulations, there are six stages over seven days, with the first three daily stages set around 20-25 miles each. The fourth stage is around 50 miles, the fifth stage is always a full marathon of 26.2 miles, and the sixth and last stage is from 9 to 13 miles.

Only 850 people worldwide are chosen by lottery to participate each year. Davies is one of 45 from the United States and the only participant from Ohio.

“People don’t run it to win prizes. They say it’s just an achievement to finish,” said Davies, who calls it a once -in-a-lifetime opportunity. “Only 11,000 people have done this.”

A big fan of television show “The Amazing Race,” Davies always thought, “I can do that.”

That sums up his mental attitude. He believes his fear of being posted on the online “quitters list” will drive him.

Participants get one flare in case they get lost in the sand, but if they use it, their race is over.

The same goes for the one allowable IV in case of dehydration. If you need a second one, you’re done.

Training for desert heat and the weight he will need to carry is the next step.

He plans to run in heavy clothing, work on his core and shoulder muscles and perhaps find a nearby college with a heat chamber.

“I recognize it’s going to be awfully hot,” he said.

He will go to Morocco a few days ahead of the race to get acclimated to the nearly 120-degree heat.

Davies said he always has been very independent, even as a child.

As an 8-year-old, he would fly from the United States to his boarding school in England. He said he even traveled alone across the Atlantic on the Queen Mary and the Queen Elizabeth when he was an elementary student.

“Someone would meet me at the dock and put me on a train to the school,” he remembers with a smile.

Now his adventures revolve around orienteering, a navigation activity using a map and compass.

Participants receive a detailed topographic map on which a variety of land features are circled as control points. The hiker navigates as quickly as possible to each marker.

Most events are held at local metro parks, Davies said.

His command of the compass, he said, will come in handy should he get lost in a sand storm in the Sahara Desert.

His loved ones at home, including his wife, Billie, can watch his progress online because he will be wearing a GPS system on his ankle. Cameras will allow them to see him at the check points.

Among those watching will be his 10-year-old grandson, Ryan Troyer, of Lake Township.

Ryan, along with Davies’ 4-year-old granddaughter, Drusilla, who lives in Portland, Ore., has Down syndrome.

“They are wonderful,” said the soft-spoken Davies, whose Welsh accent is faint but noticeable. “They are loving, wonderful, headstrong children.”

Ryan’s mother, Amy Troyer, said she watched a video about the marathon and was in “utter shock.”

“I’m behind him 100 percent. He can bring some awareness to something close to our hearts,” she said.

Troyer remembers when Ryan was born, she and her husband, Mark, were given a video that presented the most somber view of their future with Ryan.

She remembers going home and making dozens of calls to find help. She compared it to “throwing rocks and seeing if they hit anything.”

What transpired was her new career path as a counselor and advocate for people who find themselves in her situation.

“There is a reason they are here. God has a plan for them,” Troyer said. “We are a different family because of Ryan.”

Her daughter Abigail, 13, is his biggest advocate, she said.

“If I can just tell parents, ‘Don’t mourn.’ If I can help them not to be sad,” Troyer said. “I’m here to make a difference.”

Her father hopes his walk across the Sahara will bring money and awareness to an organization that has been there for his daughters.

Email ThisBlogThis!Share to TwitterShare to FacebookShare to Pinterest
Labels: advocacy, awareness, Down syndrome, grandchildren, grandfather, Marathon des Sables, race, The Up Side of Downs