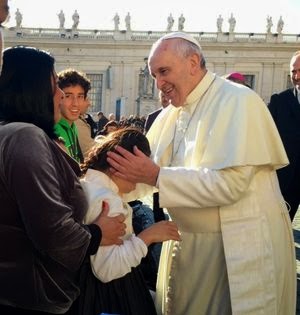 by Christina R. Garza from The Brownsville Herald:
A Brownsville family received blessings from Pope Francis on Wednesday at the Vatican—the same day as the Pope’s 78th birthday.
Two weeks ago, Dolores Zarate, wife and mother of two children, received the letter of a lifetime from the Vatican, which invited her family the be a part of the Papal audience.


Zarate had written a letter eight months ago and asked for a blessing from Pope Francis for her 13-year-old daughter, Zaraiah, who has Down syndrome, autism and seizures that affect her learning ability.
Zarate and her husband, Sergio, founded the non-profit organization Down by the Border to educate and encourage families of children with Down syndrome and other special needs. Sergio said his wife is determined to help their daughter overcome her battle to communicate.
On Wednesday, Dolores Zarate said she wished Pope Francis a happy birthday before introducing herself and her daughter. Zarate said Pope Francis bent down to kiss Zariah and said a prayer in Italian.
“Go in peace, yours is the kingdom in heaven,” Pope Francis said, before he reached into his pocket and presented the daughter and mother with a rosary.
In return, Zariah leaned her face against the Pope’s elbow and gave him a hug, something her parents said she never does.
cgarza@brownsvilleherald.com
A more complete version of this story is available on www.myBrownsvilleHerald.com.
Posted by DSD at 6:00 AM